Man, Guzzi makes a gorgeous motorcycle. To this day, my Guzzi could be my favorite machine. There's just something about them.....

All that knob-slobbing aside, man, do they need a major boost in performance - engine power, suspension..... C'mon, Piaggio. Step up and get Guzzi back to building true Italian stallions!! 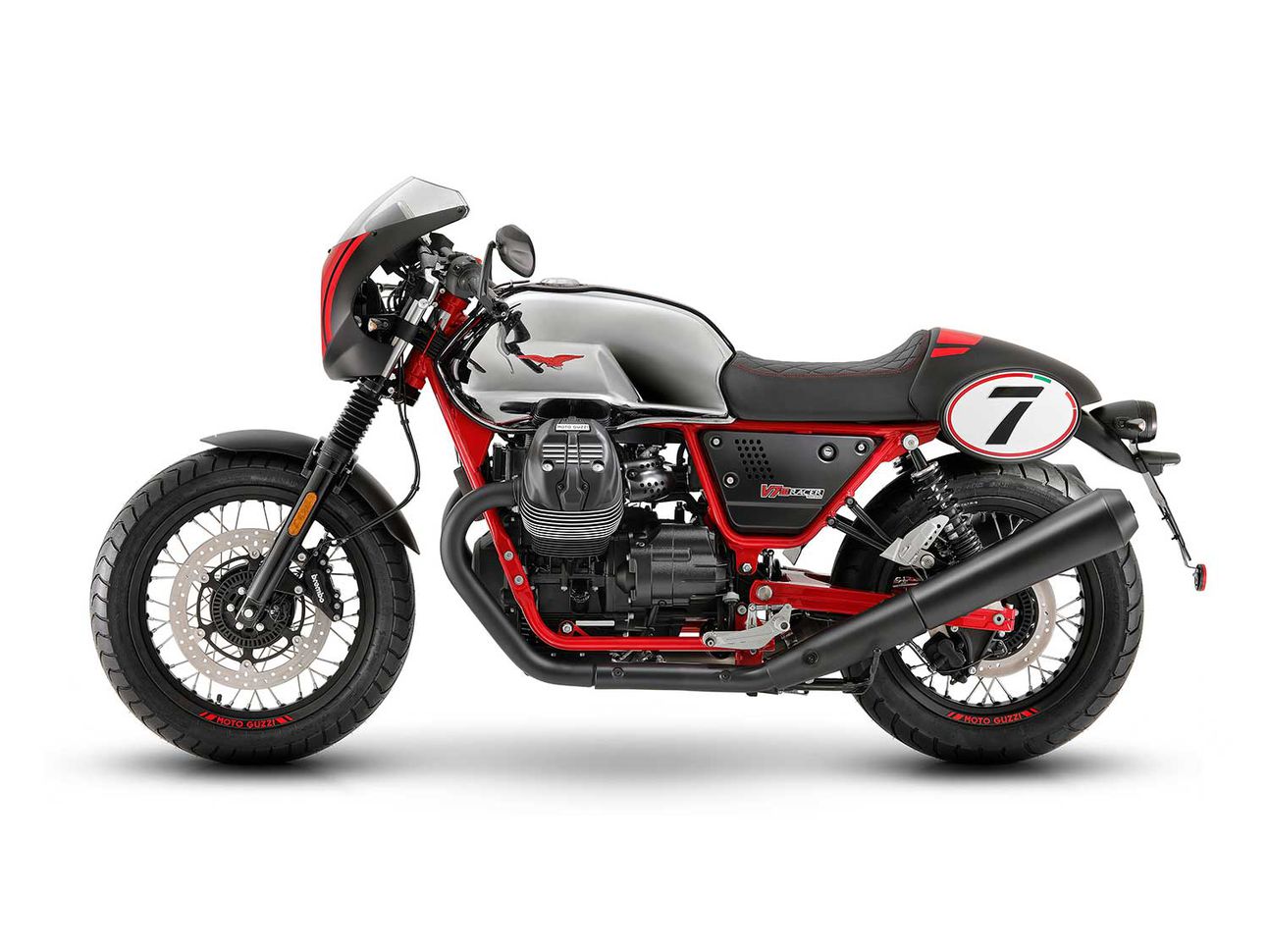 Handcrafted aluminum components and the return of the number 7 side panel indicate something special has been crafted in Mandello.Photos Courtesy Moto Guzzi

A new front fairing with incorporated windscreen highlights the updates to the 2020 Racer, and is enhanced with a red graphic and 10th anniversary lettering. The fairing is flanked by newly designed bar-end mirrors while, at the back of the bike, a new, thinner rear fender adds to the bike’s overall sleekness. The classically styled 5.5-gallon fuel tank is finished entirely in glossy chrome as an ode to the original 2010 model, but retains its distinctive leather strap on top.

An all-chrome gas tank returns to the Racer for the first time since the model’s 2010 debut.Photos Courtesy Moto Guzzi

Other visual cues return from previous Racer renditions like the rear number plate appropriately sporting the number “7” with a green, white, and red Italian flag design on the edge. The Rosso Corsa painted frame and swingarm, which originated on the 1971 V7 Sport, is also a welcome carryover from previous years. The two-up saddle keeps its shape, but for 2020 is finished in black with red contrast-cut stitching to match the leather tank strap. The removable passenger pillion hump carries the red graphic from the front fairing to the rear of the bike. 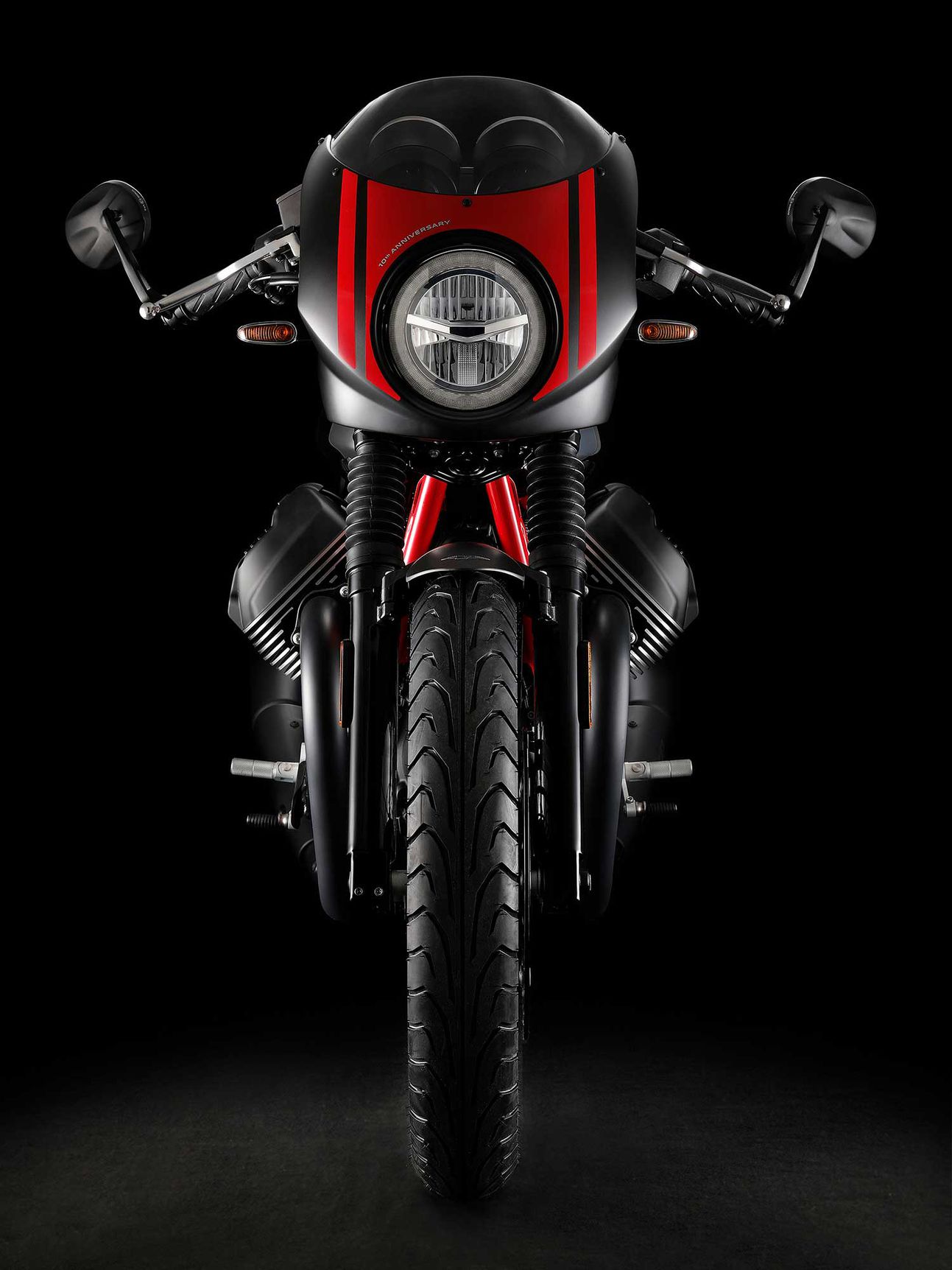 A new LED headlight is joined by LED turn and taillights, while a set of new bar-end mirrors make their debut on the Moto Guzzi’s unmistakable profile.Photos Courtesy Moto Guzzi

In the tech department, fashionably modern LED lighting by way of a new headlight, taillight, and turn signals reminds other motorists that this bike was built in the 21st century. The sporty set-back footpegs are machined from solid billet, and combine with the lightened steering stem and steering yoke guard to set the Racer 10th Anniversary apart from its other V7III stablemates. Side covers and throttle body guards handcrafted from anodized black aluminum add to the bespoke treatment. 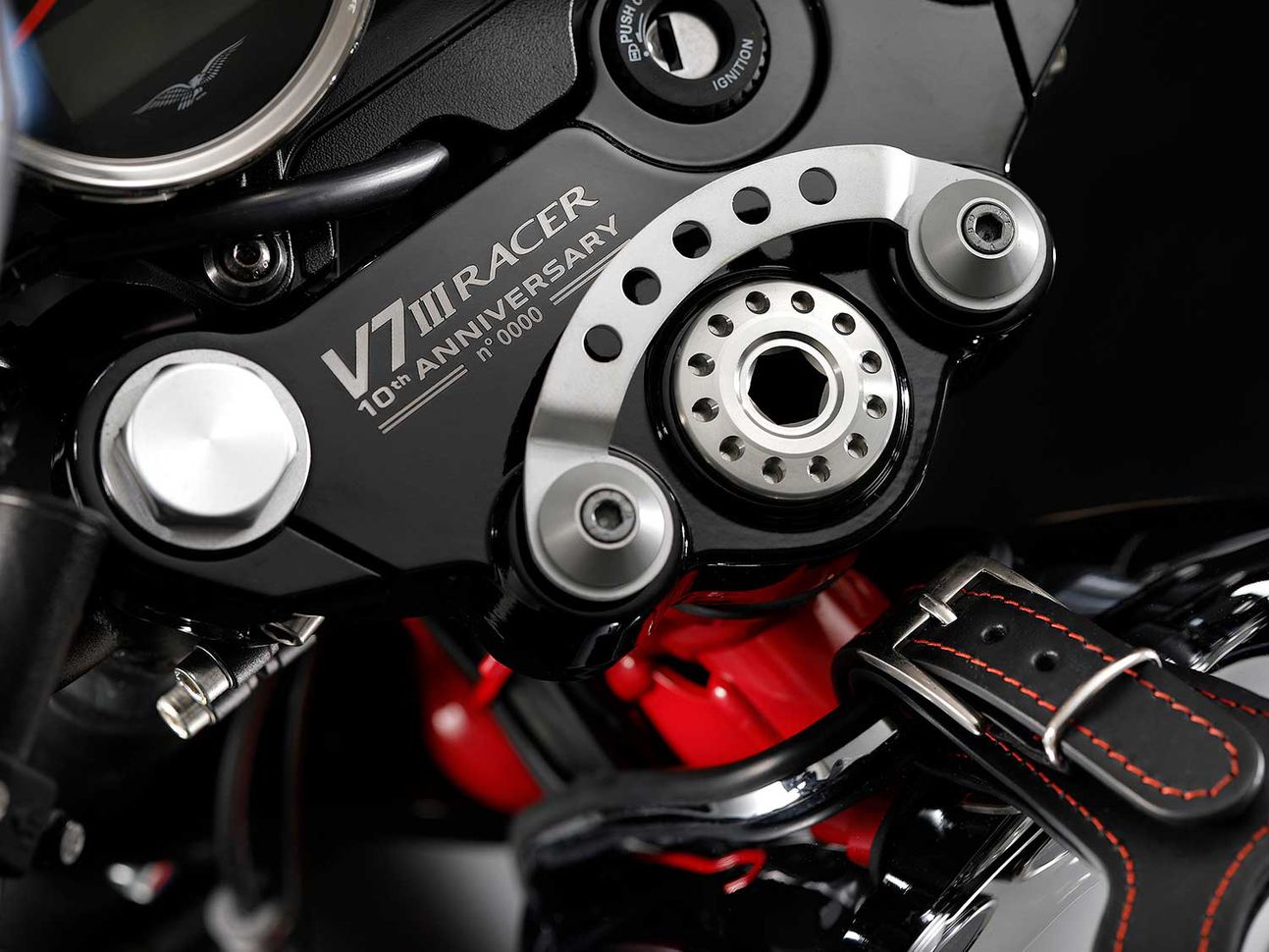 Each Racer 10th Anniversary comes as a numbered edition with enhanced cockpit features such as the black leather tank strap with red stitching.Photos Courtesy Moto Guzzi

Like the Stone S, which Moto Guzzi also debuted at EICMA 2019, the 2020 racer also sports the new, higher-performing Dunlop Arrowmax Streetsmart tires. De rigueur for the model, each Racer 10th Anniversary comes as a numbered edition as indicated by the plate mounted to the top triple clamp.

Moto Guzzi is keeping its fans in the dark for now on the Racer 10th Anniversary’s price point, but don’t expect it to be less than the 2019 model’s $9,990 tag.