Best Harley-Davidson Motorcycles To Commute On

Interesting list. Oddly, all except that electric gizmo hold some appeal for me, the defunct XR probably the most. Why did H-D stop making them (the obvious "not selling enough" aside)?

Navigating your morning and evening commute with thousands of other motorists is something that most of us have to deal with on a daily basis. Depending on where you live and where you work, that commute can be an hour-long, hair-pulling, swear-uttering, single-finger-saluting battle to the finish line or a relaxing, coffee-sipping, podcast-listening jaunt. Either way, it would be better on a motorcycle.

When discussing commuter bikes, the Bar & Shield’s offerings aren’t always part of the conversation. To be fair, not all of them are cut out for that specific task. Even some of the ones that are up to it could use a little assistance in the P&A department to help get you to work primed and ready for the day, and then back home again. But with around 40 mpg of fuel efficiency, excellent visibility, creature comfort add-ons, and a rock-solid heavy-duty chassis, Harleys have tons of potential as fun and safe commuting bikes.

What are the factors that make a great commuter bike? Engine power—and more specifically, powerband—tall seat height, and ease of maneuverability are all vital when navigating rush-hour traffic, none of which are necessarily Harley’s strong suits. Where the MoCo does excel, however, is in motorist awareness thanks to good lighting and the potential to put out a lot of decibels. Those two factors can’t be overstated among today’s distracted drivers. Harley also excels in creature comforts and modularity. A quality sound system can easily be added to any model as can a slew of windshields, seating, heated components, and storage options. Rush-hour fender-benders seem to be a daily occurence, and if it can’t be avoided, having a 600-plus pound machine built of heavyweight steel and chrome between your legs could mean the difference between calling a tow truck and calling an ambulance.

At the end of the day, riding what you have is better than not riding at all, but if you’re looking to make a change, these H-D models are a great place to start. With a mix of used, new, and yet-to-be-released models, all types of commutes are covered. In fact, several can be found in our list of the best used Harleys to buy in today’s market. 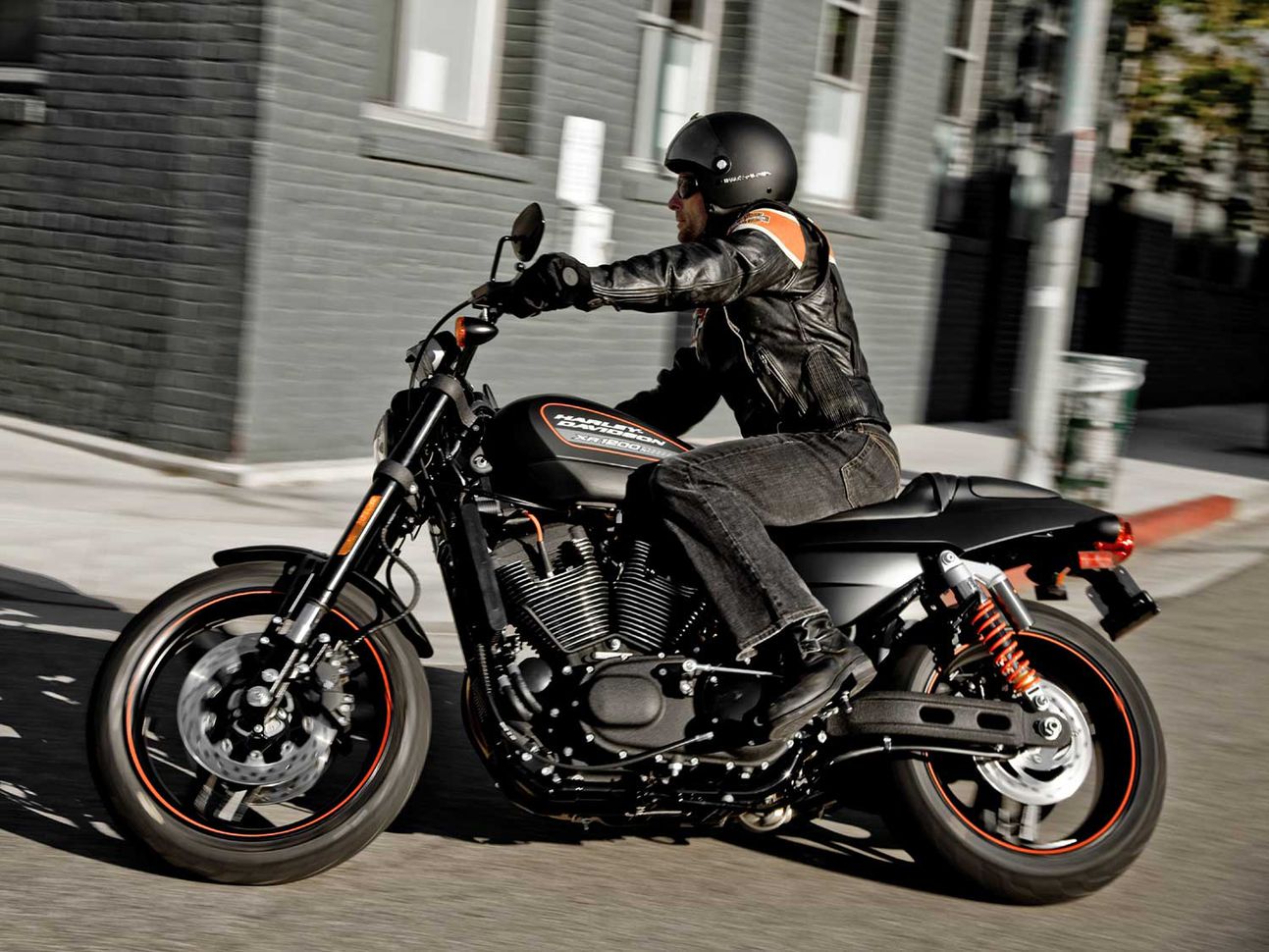 The XR1200, and later, the updated XR1200X, was one of the MoCo’s biggest steps away from the traditional cruiser that it had ever attempted. To no one’s surprise, however, they didn’t exactly fly off sales floors when new. But the XR1200 has all the hallmarks of a great commuting bike. With an uprated 1,203cc Sportster motor that makes more power thanks to a downdraft throttle body, higher-flowing oil-cooled heads, and backed by a rock-solid transmission with taller gearing, the XR1200 has available power throughout the rpm range, and in any gear.

A 30.5-inch seat height puts the rider’s viewpoint way above most traffic while long-travel suspension eats up deficiencies in the road with ease and allows for quick maneuvering. Dual Brembo brakes up front make for quick stops when the need arises. Even as a sportier model, the XR1200 still has a number of luggage options available in the aftermarket as well as windshields, electronic accessories, and seats. The 3.5-gallon fuel tank is good for around 100 miles in practical use.
2020 Harley-Davidson Fat Bob 114 Big, beefy tires that can handle any road condition mixed with good suspension, tall seat, and bright LED lighting make the Fat Bob 114 a great commuting option. Get it in Denim paint for an easy clean.Photos courtesy Harley-Davidson Motor Company

Harley’s online tagline for the Fat Bob 114 is “Outrun the zombie apocalypse,” which commuting can often feel like. H-D is not kidding around either; with 118 pound-feet of torque on tap, premium adjustable suspension, and one of the tallest seat heights in the fleet at 27.7 inches, the Fat Bob 114 is a commuter’s dream bike.

The Fat Bob’s signature fat tires make short work of messy roads and nasty weather while its larger LED headlight improves visibility to other motorists over other Softails. A pair of dual disc brakes with standard ABS provide quick stops when visibility fails. Expect to go about 130 miles before thinking about a fill-up. Get one in a Denim paint color to make for easy cleaning, but if a new one is out of budget, the older Twin Cam Fat Bob has many of the same commuting-friendly attributes.
2020 Harley-Davidson Iron 1200 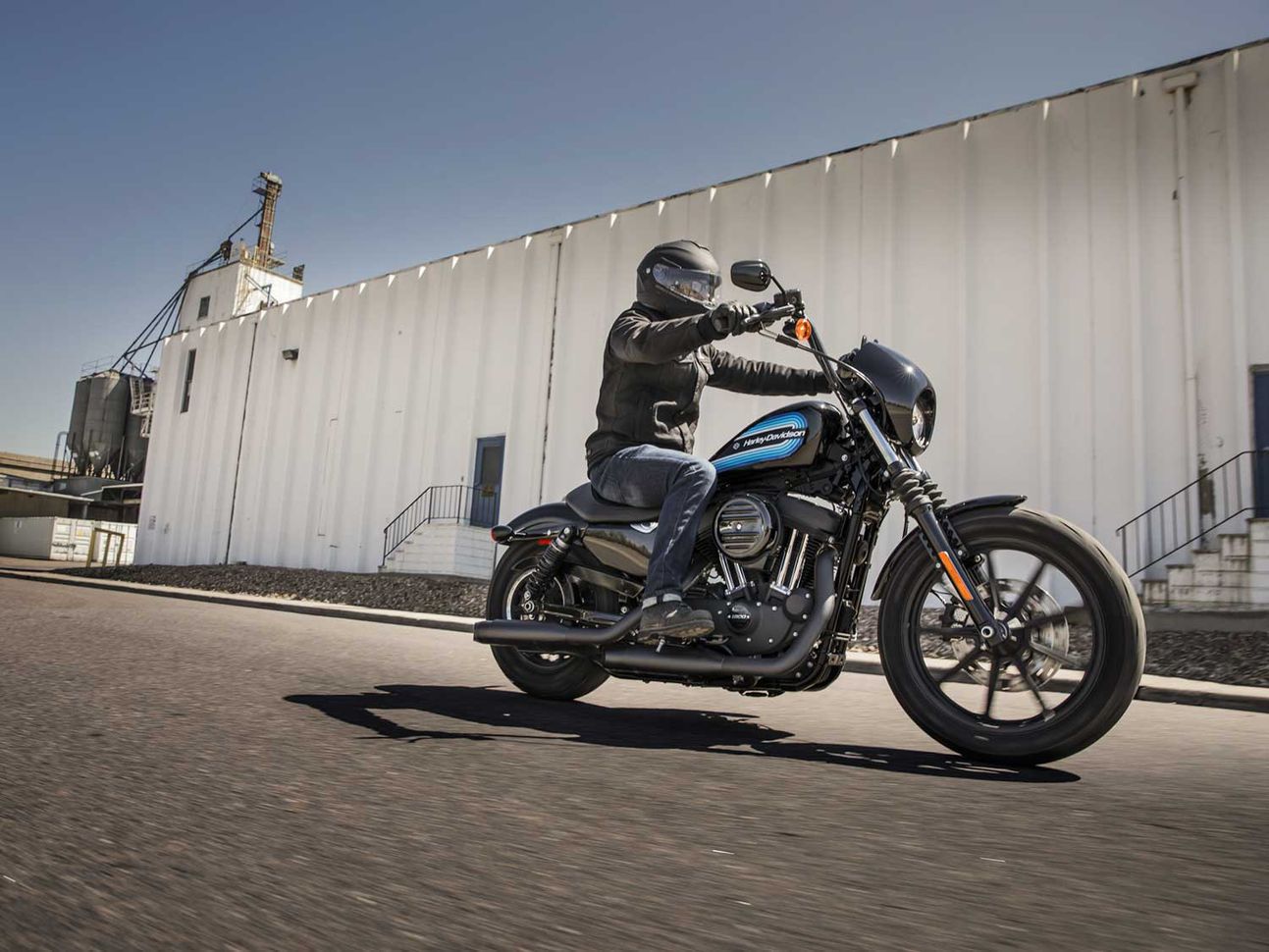 The narrow Iron 1200 is easy to maneuver around the city and park anywhere. With a low seat height and easy clutch action, it’s also easy to hold up in traffic.Photos courtesy Harley-Davidson Motor Company

Adding the torquey 1,200cc motor to make a more powerful Iron made Sporster fans, still mourning the loss of the venerable Nightster, rejoice. When it comes to commuting, having power on tap is a must, and 74 pound-feet of torque in a 550-pound package accomplishes that goal. Unlike the Forty-Eight, the Iron 1200 has the larger 3.3-gallon gas tank which is good for a confident 100 miles between gas station visits, more if grip-twisting is kept to a minimum. Optional ABS adds $795 to the sticker price, and for questionable parking situations, a security system can be had for $395.

The Iron 1200’s super-narrow build makes lane-splitting easy for our West Coast friends and parking easy for our East Coast friends. The headlight fairing provides a nice dose of wind and bug protection, while the mini-ape handlebars and mid-controls give a nice upright riding position. The 25.7-inch seat height will appeal to vertically challenged riders, however one only needs to look to the Roadster’s 29.5-inch seat height to see what taller shocks and a seat can do. For a nice used option, take a look at the aforementioned Nightster, but definitely plan on a shock and seat upgrade there. 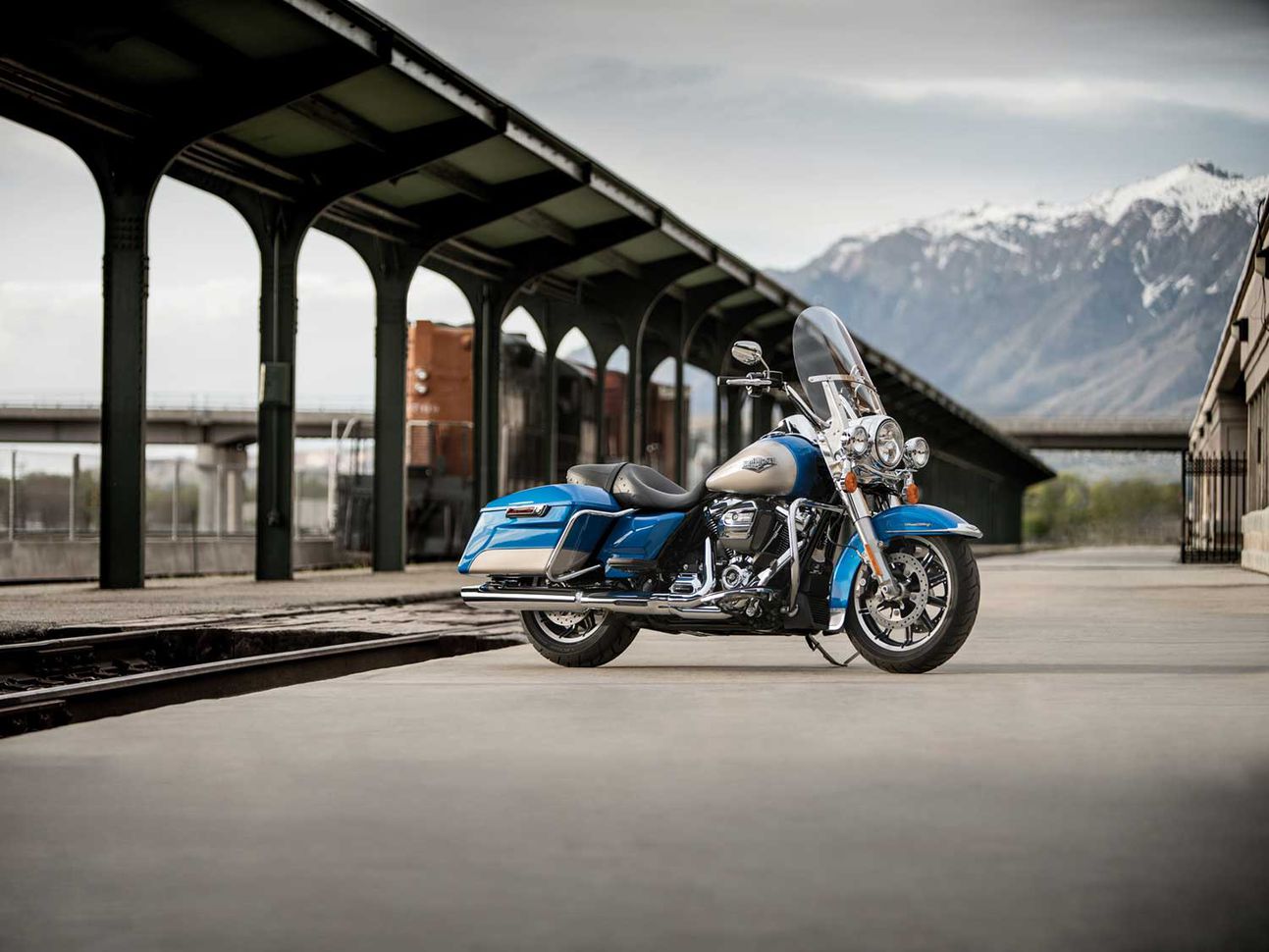 The biggest bike in the bunch, the Road King is the only one to offer significant wind protection and lockable luggage. The 200-plus miles of usable fuel range means less time at the pump.Photos courtesy Harley-Davidson Motor Company

It’s no accident that the multifaceted Road King is the only bagger to make this list. In stop-and-go traffic and city driving, the Road King’s lower center of gravity and significantly lighter weight than its faired counterparts makes a world of difference. Hand-adjustable rear shocks and standard ABS, which can be upgraded with the Reflex Defensive Rider Systems (RDRS) for $995, make it ready for battle on the car-infested roadways. Standard security and cruise control sweeten the tech package.
The biggest motorcycle on this list, the Road King already comes with a full-coverage windshield and one-touch hard, lockable saddlebags. With spotlights flanking the 7-inch LED headlight and a large taillight and turn signals out back, visibility to other motorists is maximized. For additional storage, a sissy bar, rear rack, or full-blown Tour-Pak can be added on. Sound system options are also numerous, and to keep those business slacks safe from the elements, P&A canvas wind guards for the engine guard can be purchased. The 6-gallon fuel tank puts a minimum 200-mile range between gas stops, easily covering a full week of commuting for most Americans.
2020 Harley-Davidson LiveWire 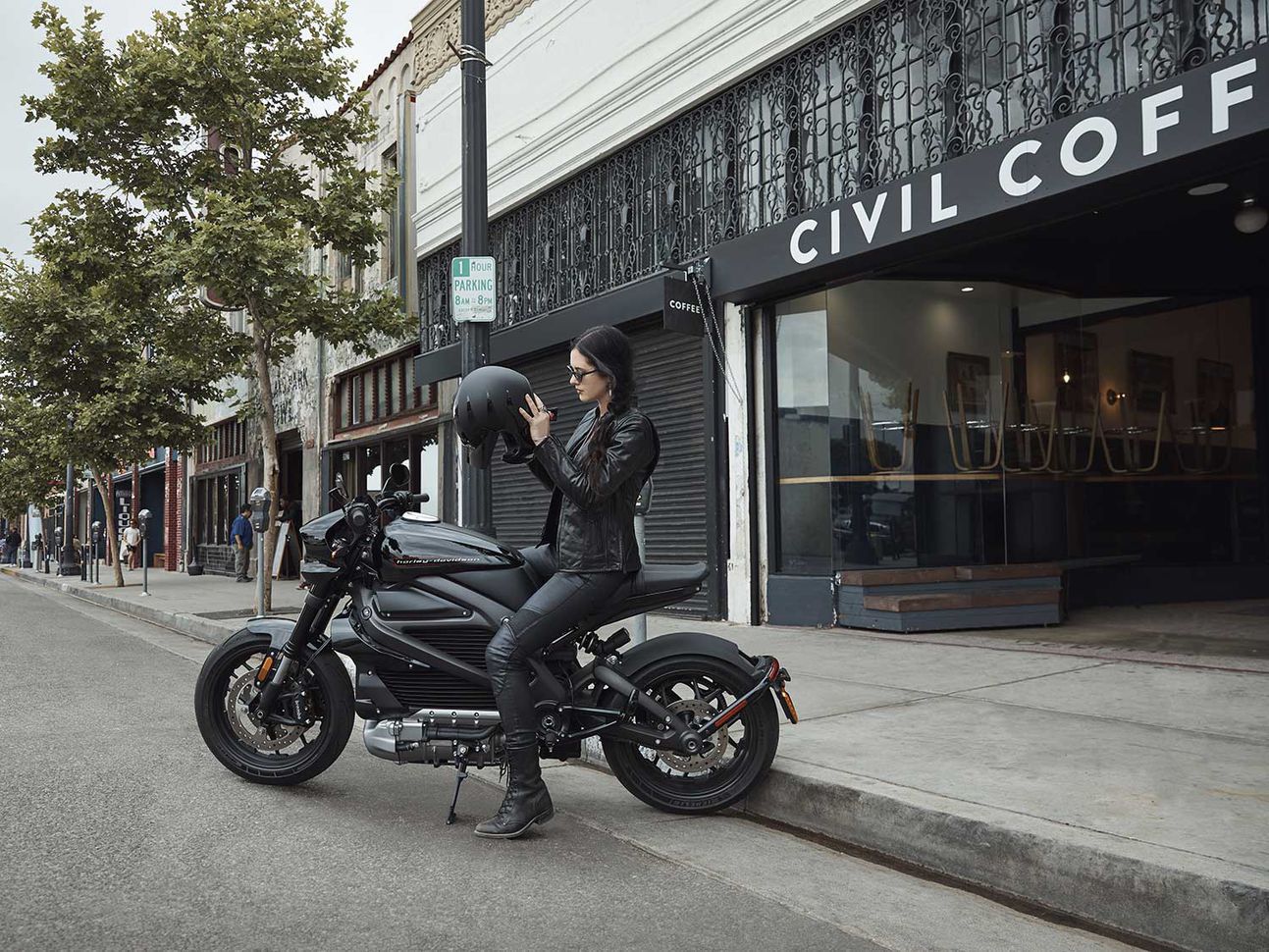 Never having to worry about stopping for gas is one advantage of the LiveWire. The technology suite of rider-assistance equipment makes for a safer, more enjoyable commute.Photos courtesy Harley-Davidson Motor Company

Harley’s all-new 2020 LiveWire is not only The Motor Company’s first electric production bike, but it was literally designed with the commuter in mind. With a 146-mile city range on a single charge, it only requires being plugged in every so often at night and never needs to stop for gas. It does the 0–60 mph run in three seconds and, with no gears to shift, is one of the most maneuverable bikes on the planet.

With seven selectable ride modes, built-in turn-by-turn navigation, and RDRS standard, it’s the motorcycle equivalent of bringing an Apache attack helicopter to the rush-hour knife fight. Not unlike an Apache, LiveWire emits an audible jetlike sound for rider feel and motorist awareness, and has LED lighting all around. For commuting purposes, tacking another $250 on to the price for a hi-vis color might not be a bad idea.
Standard equipment like ABS, security system, stereo, H-D Connect, and cruise control all add to the ease and appeal of daily use.