I can appreciate the beauty of many Ducati models, but the marque has never pulled at my heartstrings - meaning, there's never been a Ducati model I've really wanted to own. I rode the original Multistrada sometime around 2006 - 2007 and I liked it well enough. But not enough to buy one.

The Paul Smart Sport Classic models are beautiful and probably the Ducatis I like the most and could see owning someday.

The flipside is, the left side of 2016 Monster 1200 R is among the ugliest of all bikes with all those exposed hoses. What in the world were their engineers thinking? I remember a reviewer - whose name escapes me - describing it as something like the underside of a refrigerator.... 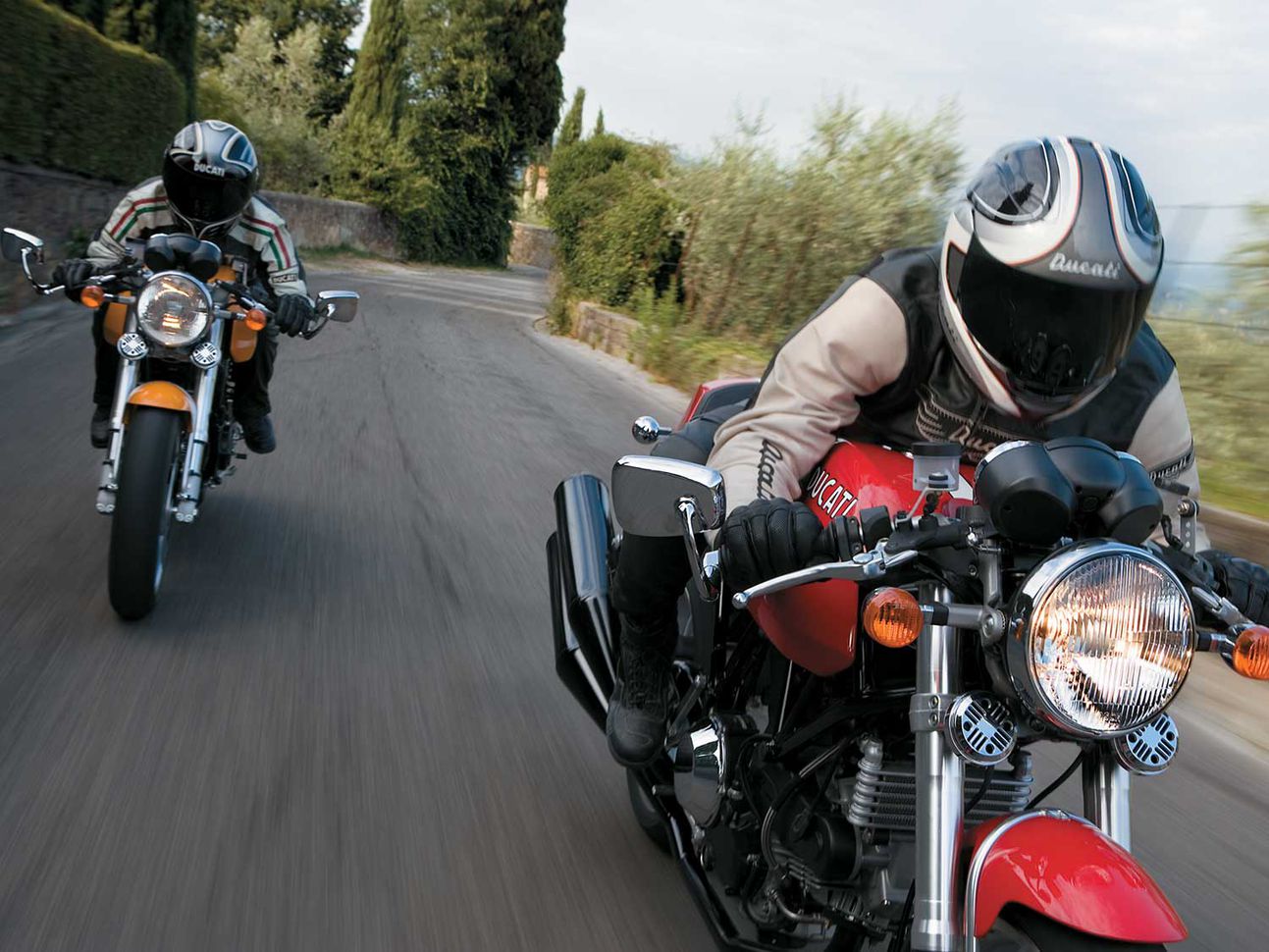 2006 Ducati Sport 1000s. The zeitgeist has encouraged a boom in the used market for these bad boys. Will the bubble burst?Ducati

There are a lot of used bikes out there that just don’t seem as exciting as the shiny new models on showroom floors. Which makes sense. As James May says: “Old technology is useless. Old art and design are still interesting.” In that light, it’s no wonder there are a disproportionate number of used Ducatis that are just as captivating as any of today’s newest models. Ducati’s strong design language and limpid brand identity make its motorcycles defy obsolescence—at least on an emotional level (all things eventually return to dust, after all).

More than that, compared to gargantuan manufacturers of cars, generators, musical instruments, and oil tankers—that also happen to build motorcycles—Ducati is a tiny company (even though parent company Volkswagen AG had the second largest market share of the car market in 2018). From the outside looking in, it seems like human ideas and values tend to get less confused by the bean counters, that embedded enemy of innovation and boldness. At Ducati, human values, effort, and ideas—both good and bad—are injected into the aluminum engine cases and molded bodywork. It’s part of the reason we can overlook useless mirrors, suicide kickstands, and short maintenence intervals—they’re minor imperfections that declare that these are motorcycles made by humans. It makes them relatable. And it’s what makes a used Ducati less anonymous than, say, the mid-’80s generic Japanese cruiser with which it shares Craigslist space. 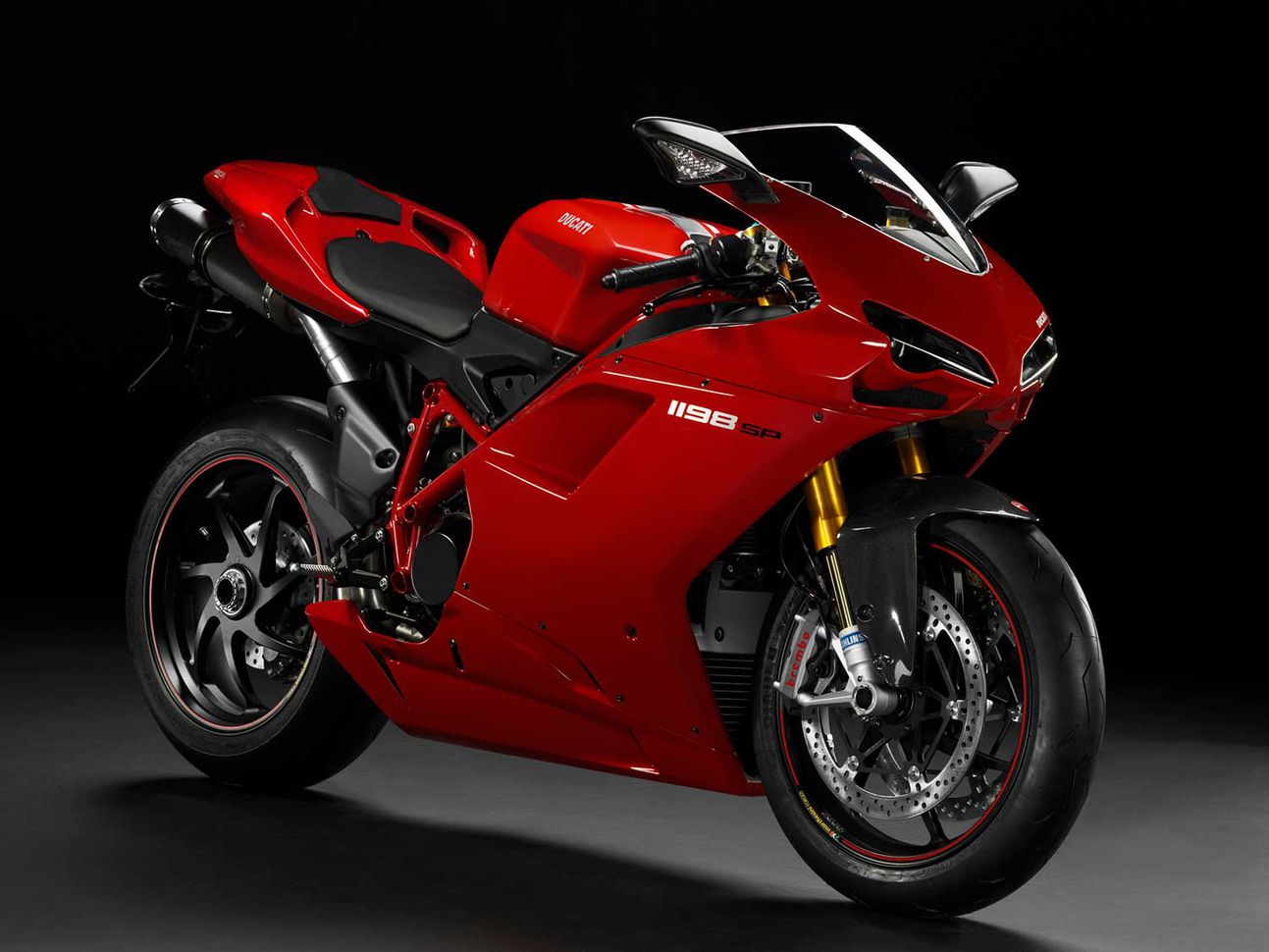 Does anyone else think the 1198 S is as desirable today as it was seven years ago?Ducati

And I’m not talking unobtanium Supermonos and green frame 750 Supersports. For around $5,000, you can get a used Ducati that’s just as inspiring, though less advanced, as the bikes built in Borgo Panigale today. Here are a handful of used Ducatis worthy of your garage space. 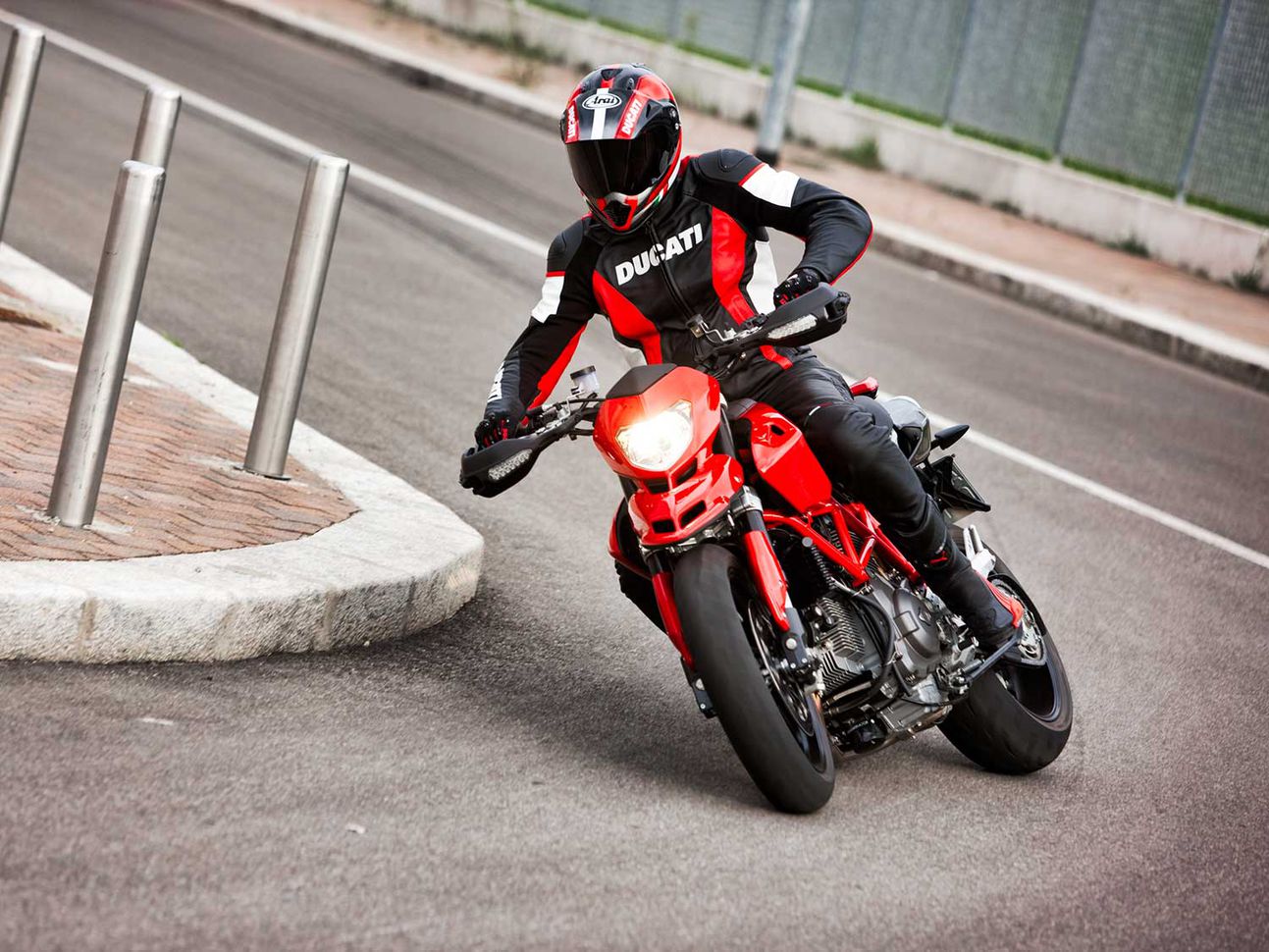 Introduced in 2007, the Hypermotard 1100 was Pierre Terblanche’s final project as head designer at Ducati. Its minimalist supermoto-inspired styling accentuated the venerable dual-spark Desmodue and bare trellis frame. It was an undiluted ode to scofflawery so winsome that it pioneered a formula now beloved by Ducatisti. Okay, 90 hp (claimed) may not sound terribly gratuitous, but the Hyper delivers power with Clydesdale-hooved, asphalt-smearing charisma. Aside from Ducati superbikes, one could argue the Hyper is Ducati at its most Ducati-y. It’s like your swarthy buddy who always overindulges at the neighborhood Christmas party: As he gesticulates with ever more animation and loudly talks to the party’s hostess like an inch from her face, you know it’ll take only a single word from her to convince him to streak through the police station while singing “Il Canto degli Italiani.” The Hypermotard is the most fun bike at the party and it gives the Italian middle finger to stereotypes—and to temperance. 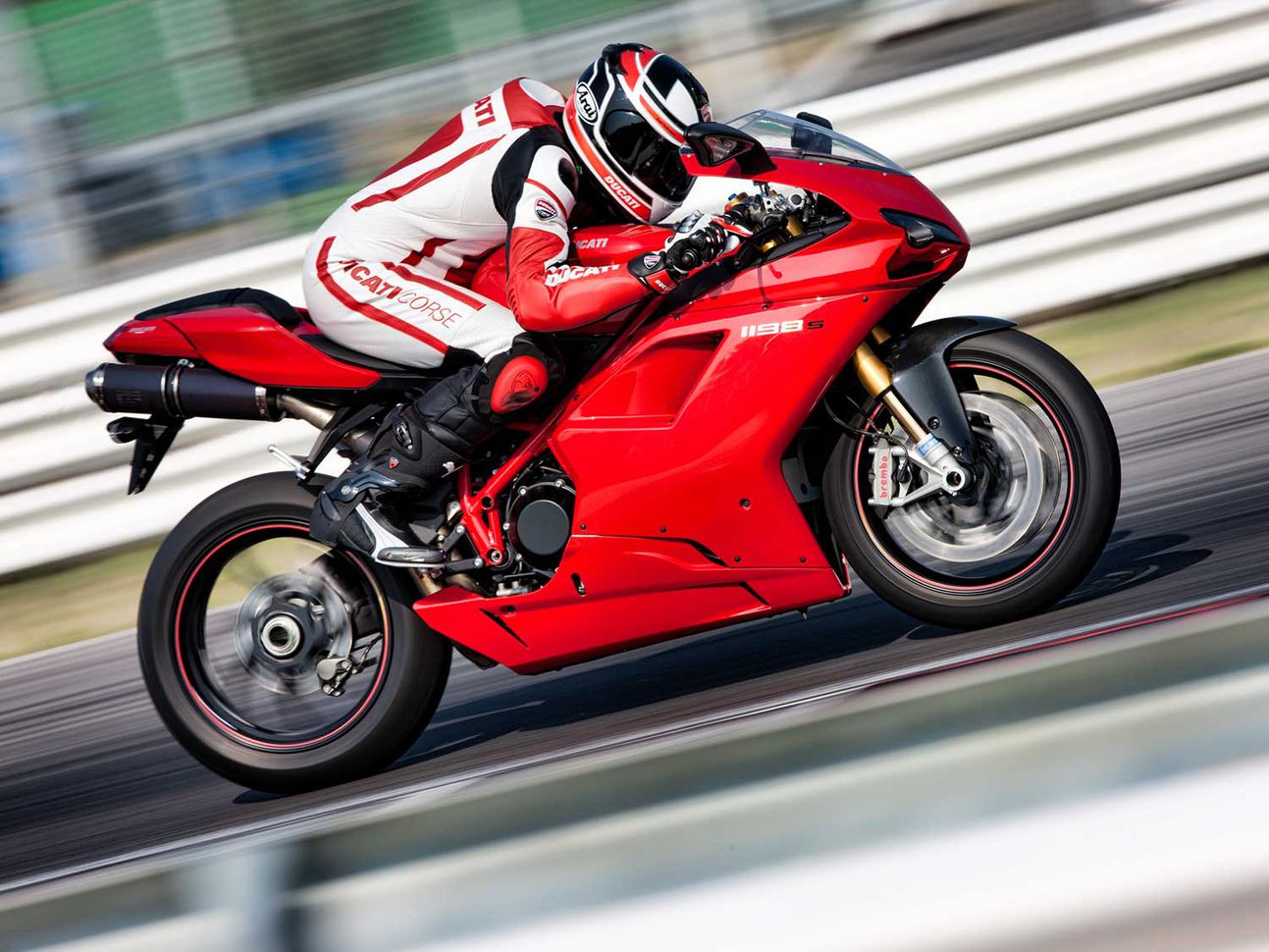 The Ducati 1198 series is the last superbike from Borgo Panigale to feature a trellis frame and rubber band V-twin.Ducati

The 1198 is the last of the classic Ducati superbikes. With the introduction of the 1199 Panigale—powered by the quick-revving Superquadro engine bolted to a Monoscocca frame—the 1198 became an instant collector’s item. Its Testastretta Evo is the final evolution of an engine that can trace its roots back to Massimo Bordi’s Desmoquattro, and even—in spirit—to the Pantah, the first of the production belt-drive motors. In an era where aluminum frames were becoming increasingly rigid, Ducati’s steel trellis frames proved cornering feel depends on flex. The “slow-steering,” rock-solid feel of a trellis frame is just as significant to the Ducati mythos as the dry clutch rattle and Termignoni-amplified soundtrack of its 90-degree twin. As the final expression of one of the most successful designs in production racing history, we salute the 1198. May it live forever in biking lore.

2003 Ducati Multistrada
When many of us first laid eyes on the original Multistrada, we were horrified. The 999-esque windscreen is stacked on top of a Russian nesting doll-shaped headlight stacked on top of a bagel-shaped vent pod thing. It wasn’t beguiling so much as it was offensive—beauty being subjective, naturally. Now, whenever I see one in the flesh, I confess that I’ve changed my mind. I think it looks awesome and I want one. The original Multistrada may be one of the most significant modern Ducatis in that it successfully transformed the brand from a “racebike company” to a “motorcycle company” by boldly treading into the very un-Ducati-like realm of ADV bikes. This was no Monster or ST. Next to today’s long-travel touring bikes, the Multistrada’s sparseness is a virtue. Its 17-inch wheels and 414-pound weight (claimed) is downright sporting by today’s standards. 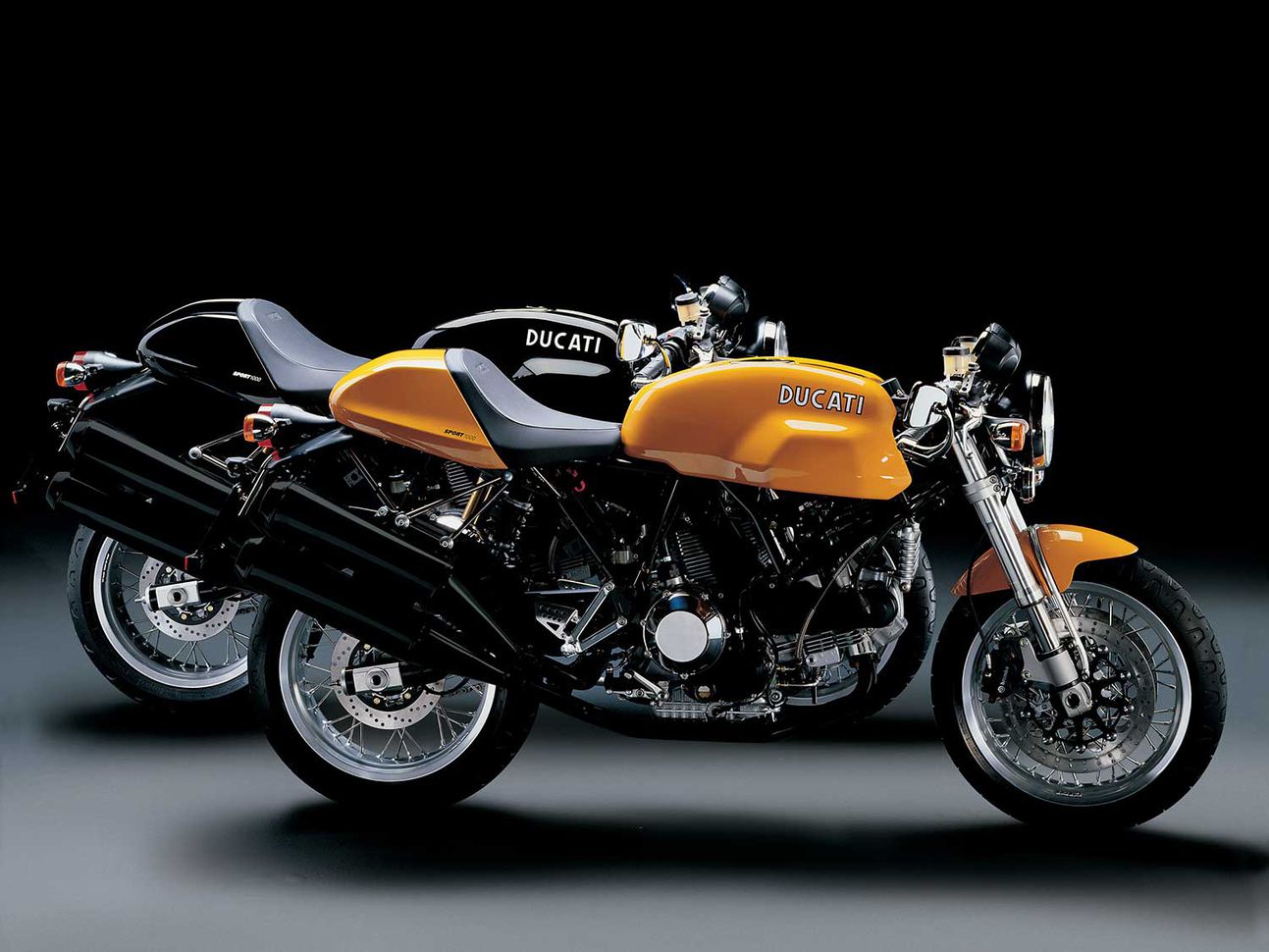 Ducati’s SportClassic line of retro bikes predated the boom of classically styled machines now so common that Ducati builds a gazillion variations of the Scrambler. The SportClassic experiment was as disastrous in terms of sales as it was beautiful. So after three short years of production, they were cast on the trash heap of history. Today, they’re uncannily expensive because people want them so badly. It’s tragic people didn’t want them back in the day because heaven knows they’re more delectable than any retro-inspired machine Ducati’s released since. People suck. 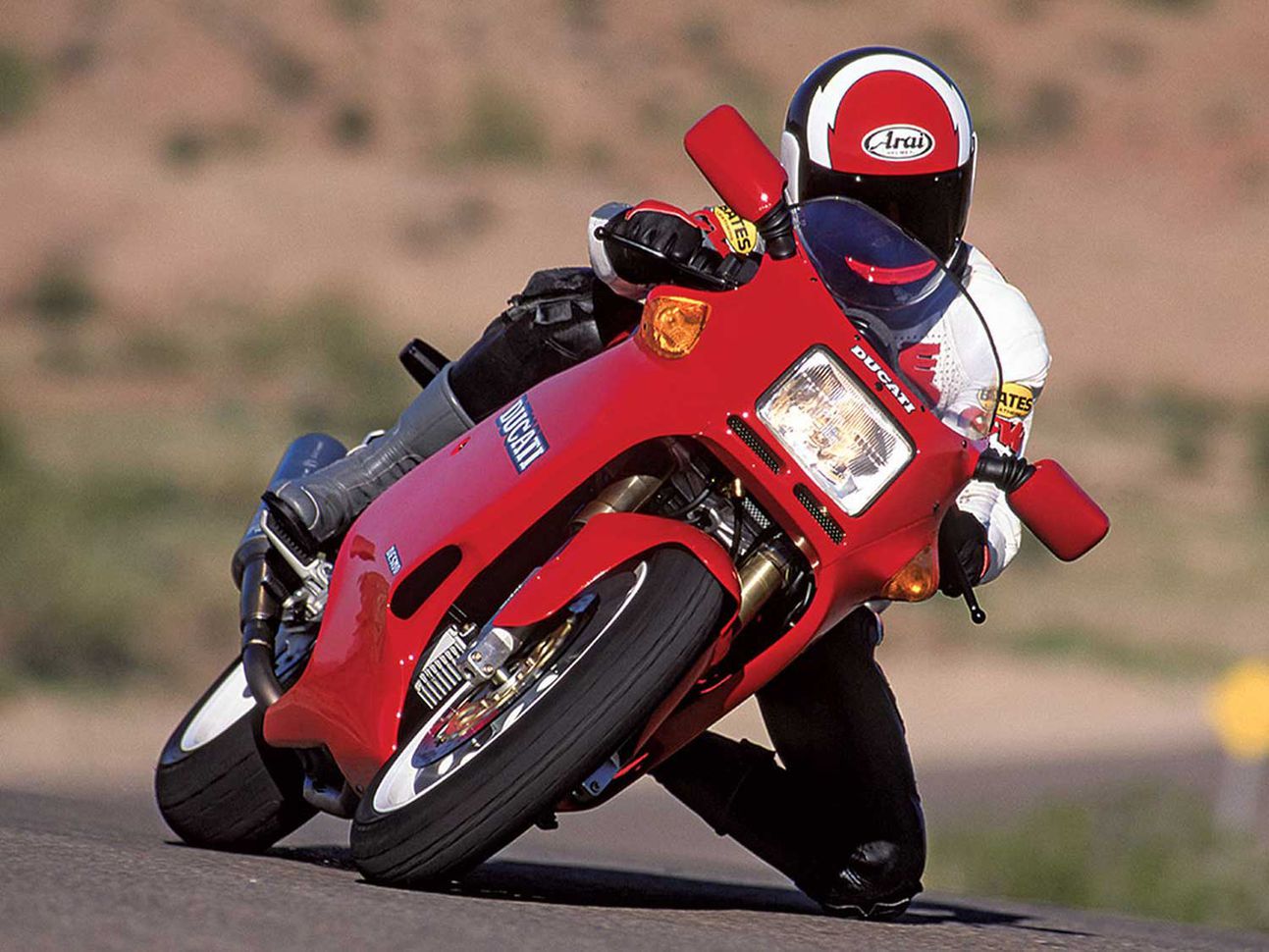 Miguel Galluzzi’s Supersport was a machine worthy of its name. The Super Sport (then Supersport; now SuperSport) badge is one of the more rife names in Ducati lore. For those of us who grew up ogling its square-headlighted beauty, the ’90s model can stand shoulder to shoulder with the bevel drive 900SS, which is saying a lot. Heck, if it was good enough for Peter Egan to own a couple of them, it’s good enough for me. Although candidly, it takes a certain type of person to own and love a ’90s Ducati, especially given the upkeep. Whenever I let friends ride my ’99 996 S, I always tell them, “You have to love it to like it.” They’re hardly refined and can be demanding to ride well, but they reward you for your sacrifice. Modern motorcycles are objectively brilliant, but riding a ’90s-era Ducati is a Dionysian experience that overwhelms the senses and plays upon the heart. 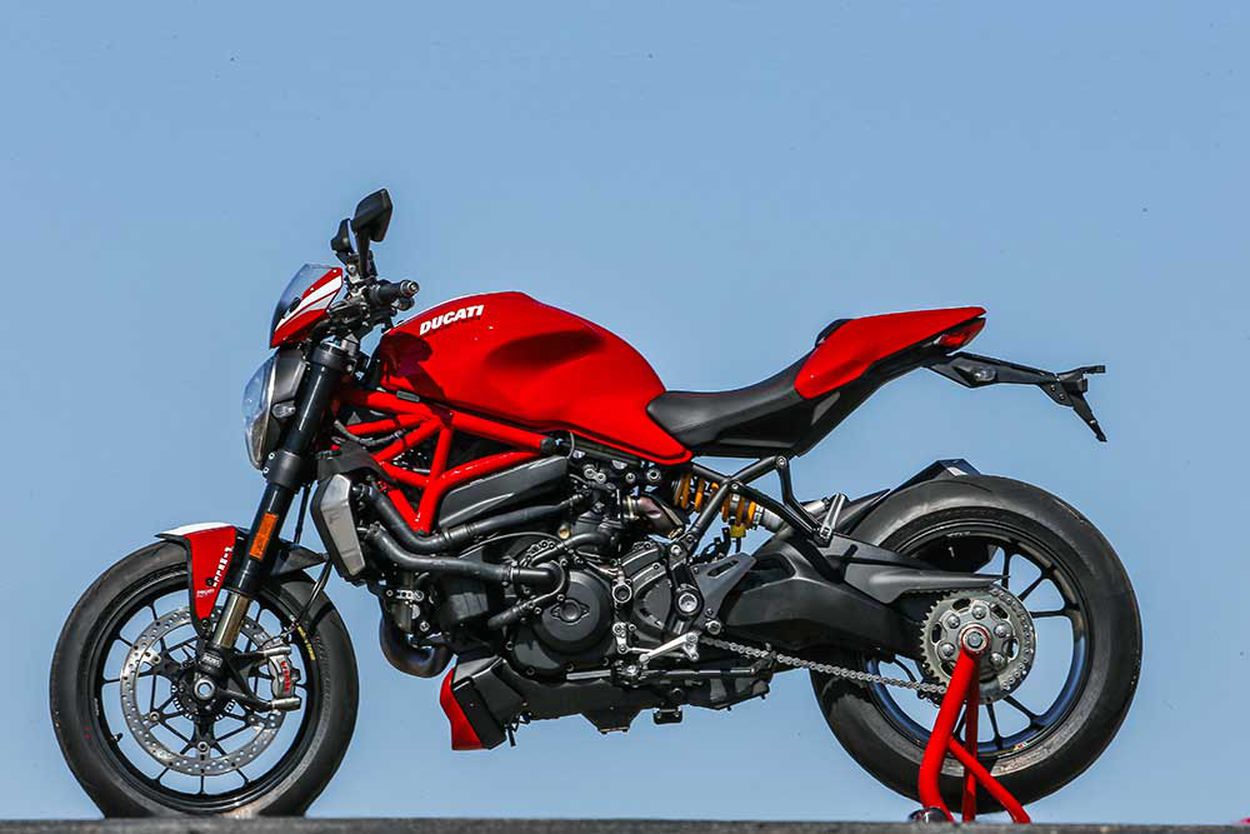 A Monster for the track.Ducati

Ducati has a long history of building performance-oriented Monsters (see: Monster S2R and S4R). The 1200 R is the highest-performing Monster to date, with a claimed 160 hp on tap, Öhlins suspension, and modern electronics. After the 1098 Streetfighter absconded, Ducati needed a true hypernaked to compete with the likes of the KTM 1290 Super Duke and Aprilia Tuono. The Monster 1200 R was it. But the Monster was never just about outright performance, so it’s kind of an outlier model in the range. But a cool one. 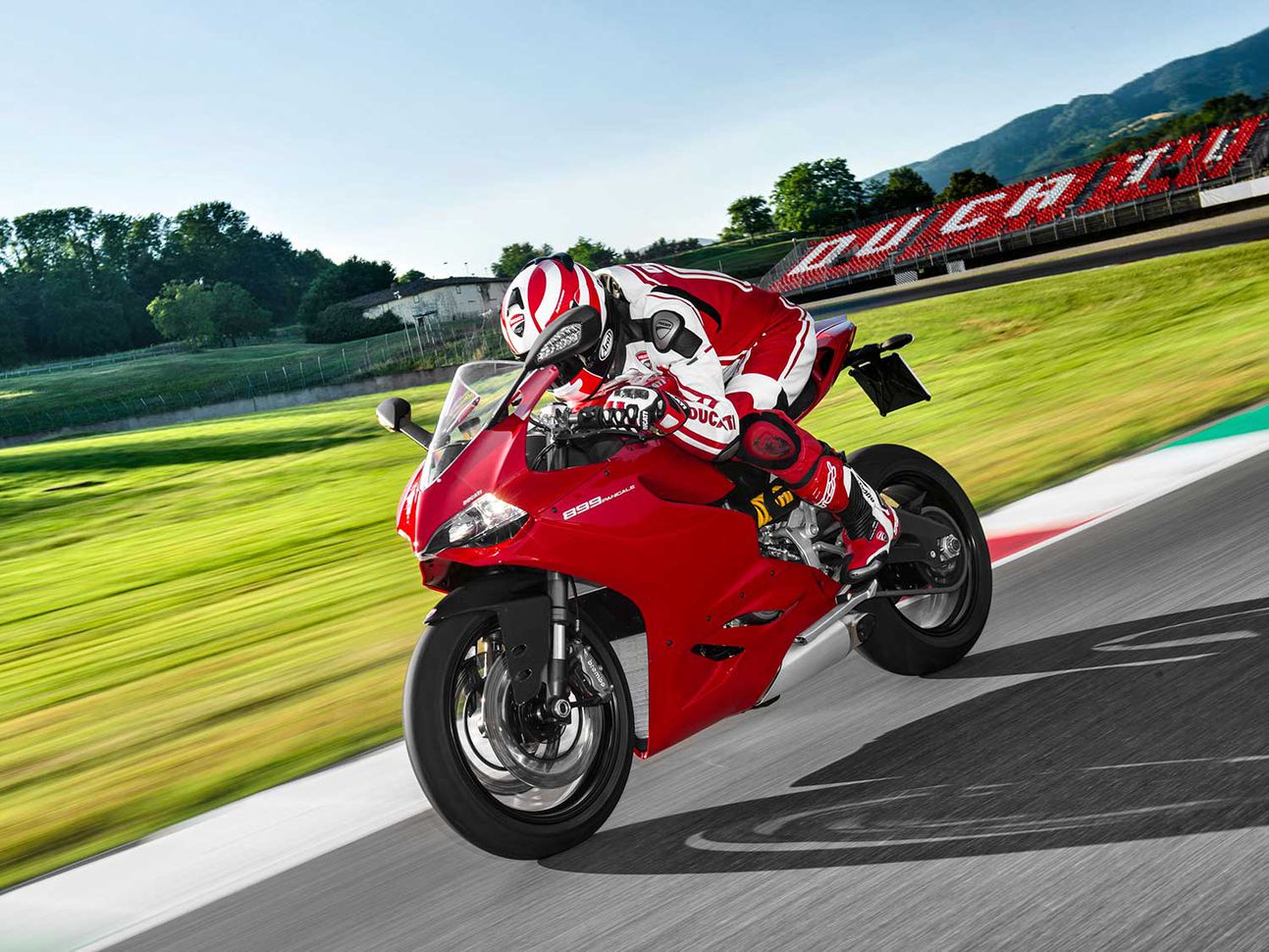 I just traded in my 2015 899 Panigale for a 2019 Hypermotard 950 (true to my word), but I still think the 899 is one hell of a motorcycle. I originally bought the “middleweight” Panigale because I wanted the modern version of my 996 (another bike that deserves to be on this list). If, like me, you think superbikes should be either 750cc four-cylinders or 1,000-ish-cc twins, the 899’s displacement alone displays a fidelity to racing classicism that just feels right. The 899 doesn’t really handle like a trellis-framed, long-stroke Ducati; it revs quickly and corners with the same effortless precision as a 600 supersport. For me, that means it’s less inspiring on the street than my 996 (or Hypermotard), but it’s a heck of a trackbike. Seriously, is there a bike more ideal for the average trackday enthusiast? The ergos are accommodating for hanging off, there’s enough of a powerband that you don’t have to keep it pinned like a 600, and it roars like a banshee. The 899 isn’t too technologically removed from the brand-new Panigale V2 either, and you can get a clean one for a lot less coin. 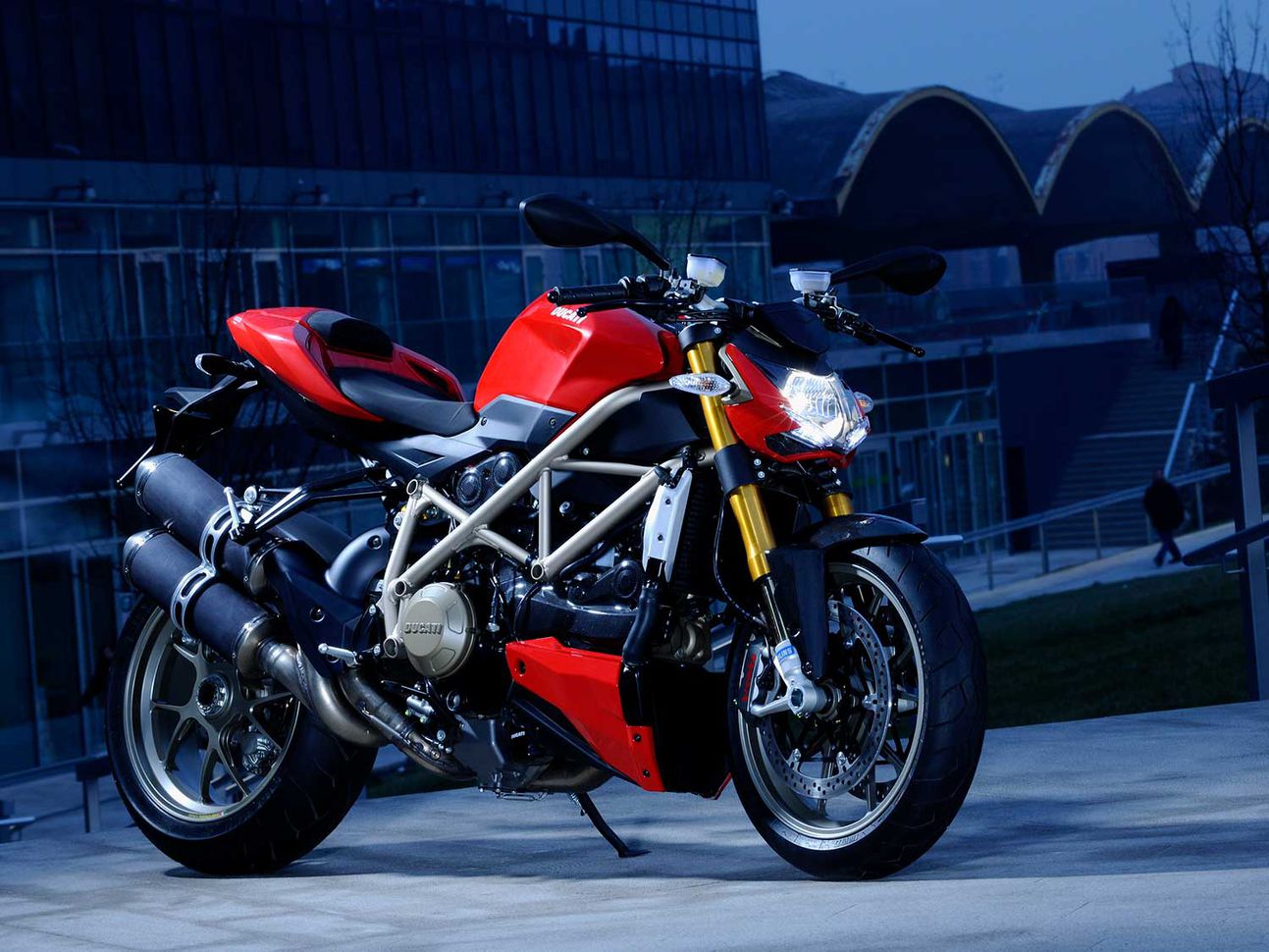 Now that Ducati has unveiled the 2020 Streetfighter V4, we can’t help but remember Borgo Panigale’s first bad boy naked, the 1098-based Streetfighter. Dropped from the lineup after 2013, the 1098 is a little less composed than its 848 sibling, but the big-bore Streetfighter still wins our hearts. A superbike that sheds its bodywork and replaces its clip-ons for a real handlebar is never going to be a bad thing. Compared to the 848 version, the 1098 is more raw and exhilarating to ride. Which is sort of the point of a streetfighter. It has 155 claimed horsepower, up-spec components, sub-400-pound claimed dry weight, classic V-twin soundtrack. It’s even more reason to look forward to a Desmosedici Stradale-powered Streetfighter. I’ll take both. How about you? 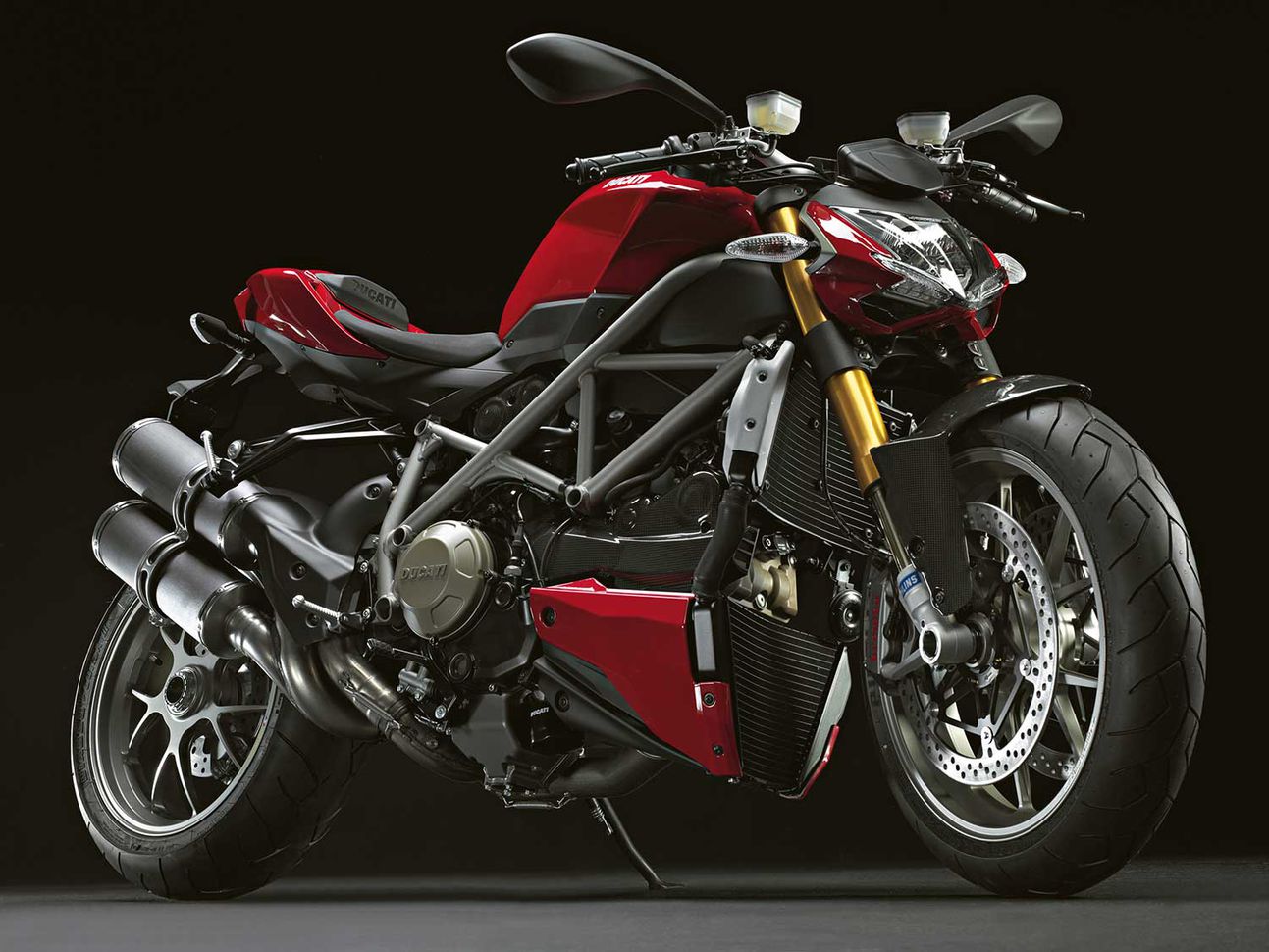 The blueprint for the Streetfighter V4. So excited…Ducati 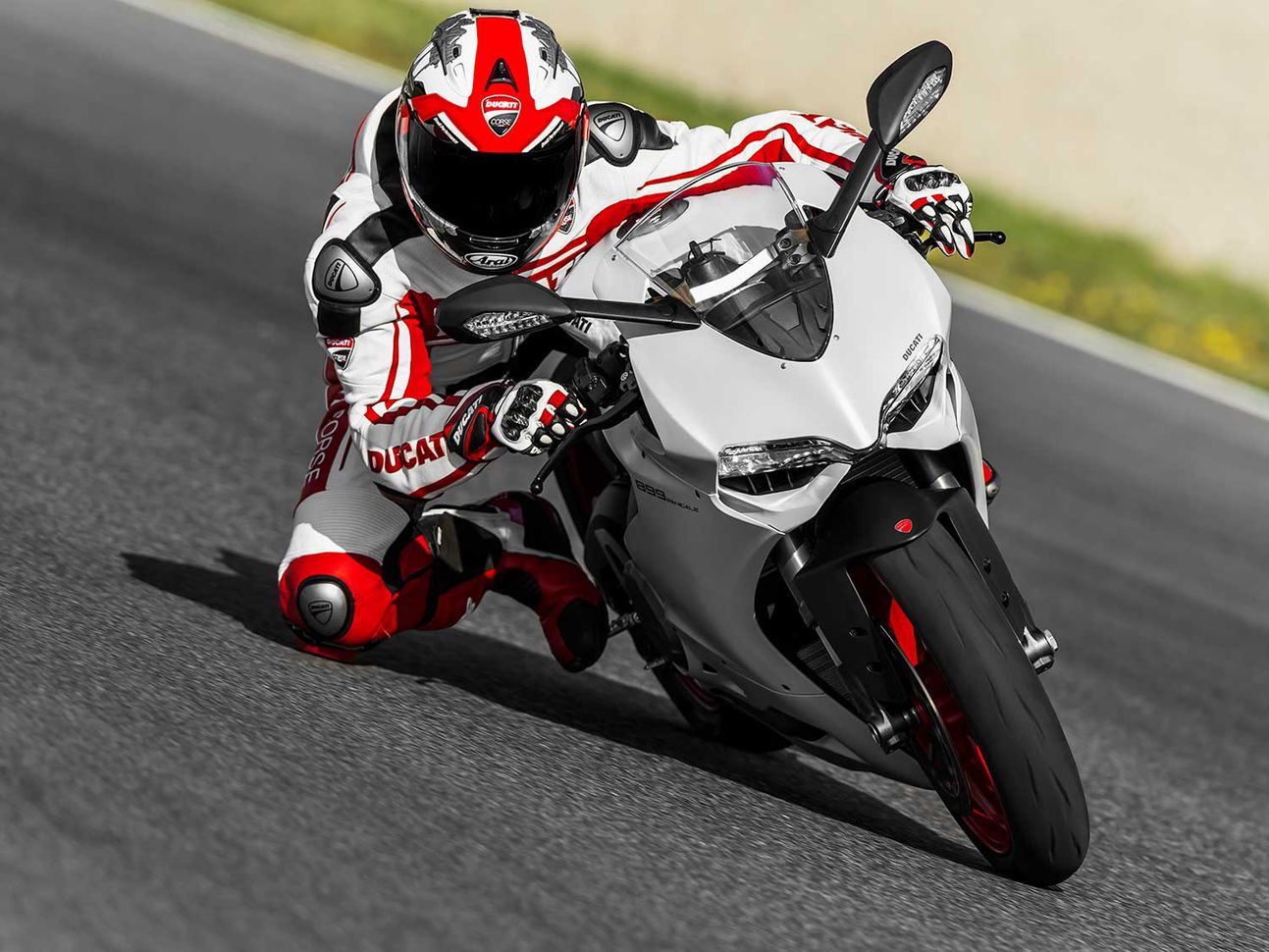