I hope Husky brings it to production. Furthermore, I hope they open a dealership within a zillion miles of my house....

Husqvarna revealed an adventure bike concept called the Norden 901. If that alone wasn’t enough to get our juices flowing, there’s the fact the Norden is based around our Motorcycle-of-the-Year winner, the KTM 790 Adventure R.

Husqvarna didn’t exactly come right out and say that, it’s clear from looking at the engine, the frame and the 790 ADV’s distinct low-slung fuel tank that the Norden shares much of its DNA beneath the rally bike styling.

For the Norden, Husqvarna increased the KTM bike’s 799cc engine 889.5cc, a change the orange brand is already making with its new 890 Duke R. For the Norden, the engine has been tuned specifically to suit adventure touring needs.

The Norden being a concept, Husqvarna hasn’t released much detail about specifications. Husqvarna says the Norden strikes a perfect balance between “off-road performance and touring ability,” while also claiming class-leading lightness, which would mean coming in lighter than the 790 Adventure’s claimed 366-pound dry weight. Husqvarna also reveals the Norden 901 is equipped with WP suspension and runs on a 21-inch front wheel and a 19-inch rear wheel. From the photos, we see what looks like dual TFT color screens, with the top screen showing a compass, and a tachometer on the lower screen completing the compass’ circular shape. Between the display and the handlebars we see a small panel bearing the USB symbol, obviously hinting at a USB port.

The concept is shown carrying a pair of soft saddlebags and a tail bag designed specifically for the Norden. At the moment, the Norden 901 is just a concept, but it’s safe to assume that Husqvarna has plans to put this adventure bike into production.

Now, would some local dealer take on Husqvarna so I don't have to drive to outer-Jebrue to see this? And, the 701 Enduro LR? Please??

Recent spy shots reveal Husqvarna has some pretty interesting road bikes up its sleeve. Chief among them is a purported 901 Adventure, carrying what would be a new engine configuration for the brand.

I make that assumption because the 901 Adventure was flanked by a new Svartpilen that’s powered by a clearly visible twin-cylinder mill. And because it indicates further utilization of the new 890 parallel twin Husqvarna’s parent company, KTM, is currently developing. The brands make good use of engine platforms. If you zoom in close on the covers in the Adventure, you can clearly see KTM badging.

Where this 901 diverges from the previously spied 890 GT from KTM is in the looks department. The Husqvarna version has a more retro vibe when looking at its bodywork and cowl, which isn’t a bad thing at all. In fact, even at such an early stage the body panels appear pleasing. By the looks of things, it is designed to house some auxiliary lights on either side of the main round headlight. This will keep the motorcycle’s internals and rider protected, while exuding a utilitarian stance that will likely be appreciated by adventure riders.

Other elements like a decent-sized fuel tank, luggage racks, skid plate, hand guards, spoked wheels, and what looks to be a really neutral, comfortable ride position further the appeal of the design at this stage.

If this is indeed to be a Husqvarna 901 Adventure, I have to say I like where the company’s head is at. Rather than being pigeonholed into the futuristic minimalism embodied by its Svartpilen and VItpilen streetbikes, Husqvarna appears to be designing with the segment rider first and foremost in mind. This bike will no doubt have a high level of fit and finish, and in final trim will likely be a head-turner, but it will also be useful for those looking to venture far and wide.

Will we see a more developed version during next year’s EICMA show? Stay tuned.

This video is remarkable on several levels. First, kudos to Husqvarna for a well-written press release. Man, I felt like I was back in a college-level writing class!

Secondly, it not only confirms production of the Husky, but it also dishes on KTM and Ducati middleweight ADV bikes. Apparently, even though it has only been out a year, KTM is planning an engine upgrade to the 790 Adventure bikes - to 890 with at a gain of at least 18 hp. Speculation is that the new Katooms will be released first next year, then the Husky, which will use a modified version of the new KTM engine.

It also mentions that Ducati may be considering a bike to compete here - some derivation of the 1100 Scrambler. Though, they say that production of the Ducati is far less than certain.

Man, it is a great time to be alive if you like ADV bikes!!!!

The Norden will soon be a production model.Husqvarna

Husqvarna has made it official: The Norden adventure motorcycle will soon be a production bike. Earlier this year we spotted the Norden during testing when spy shots of the machine were revealed, marking a potentially big change to the brand's street lineup. Then, at this year's EICMA show Husqvarna gave us a look at the fully dressed concept and it was clear a popular bike was in the making. 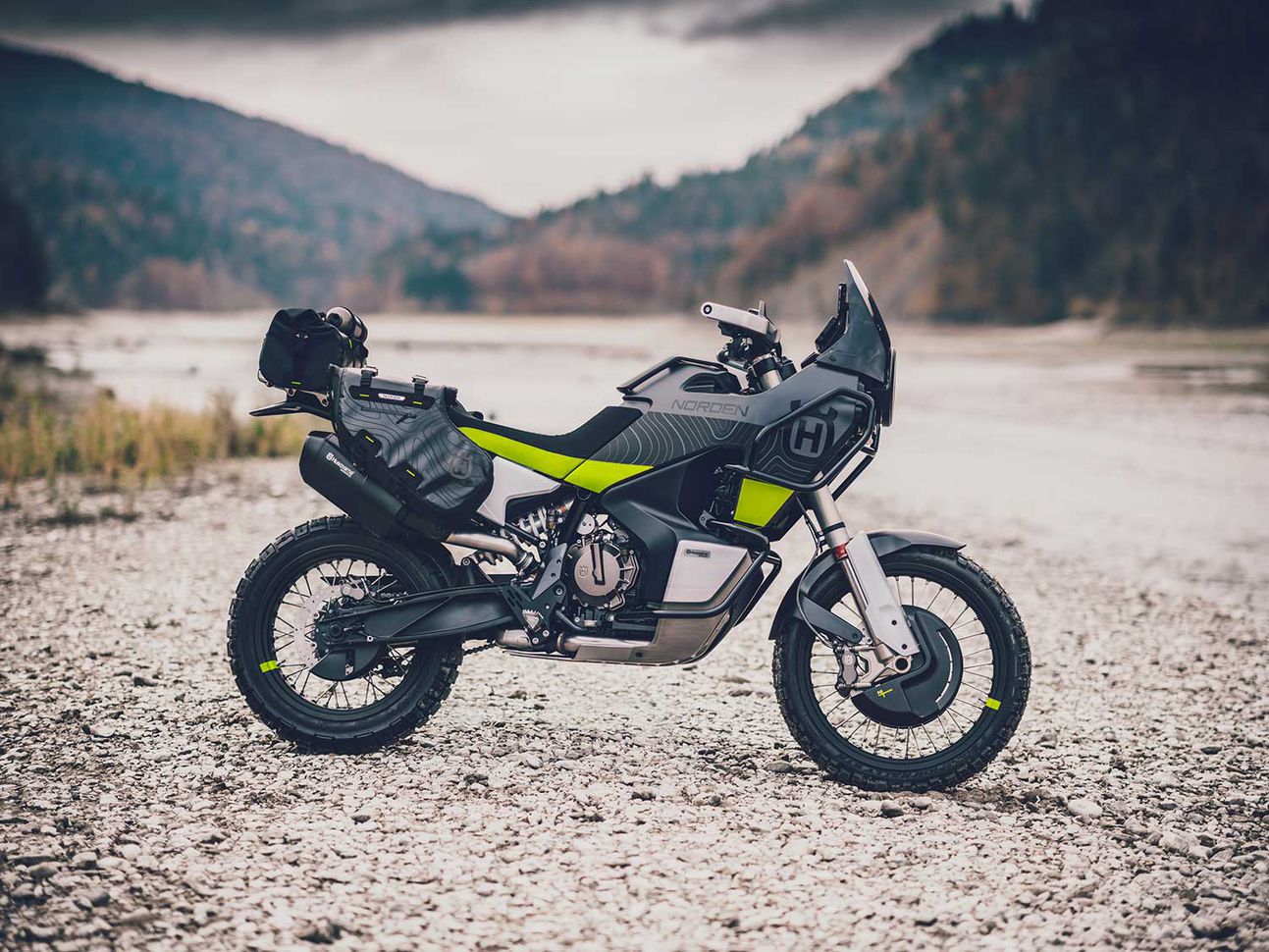 The Norden will be powered by an 889cc twin engine, but beyond that the details are slim.Husqvarna

As we noted during our EICMA coverage, the Norden will be Husqvarna’s first-ever adventure-touring machine, and it breaks with the current stock of road-going bikes with a twin-cylinder, 889cc engine. It’s also ready for plenty of off-road duty thanks to a 21-inch front wheel/tire and 18-inch rear wheel/tire configuration. WP Suspension components will soak up the bumps. 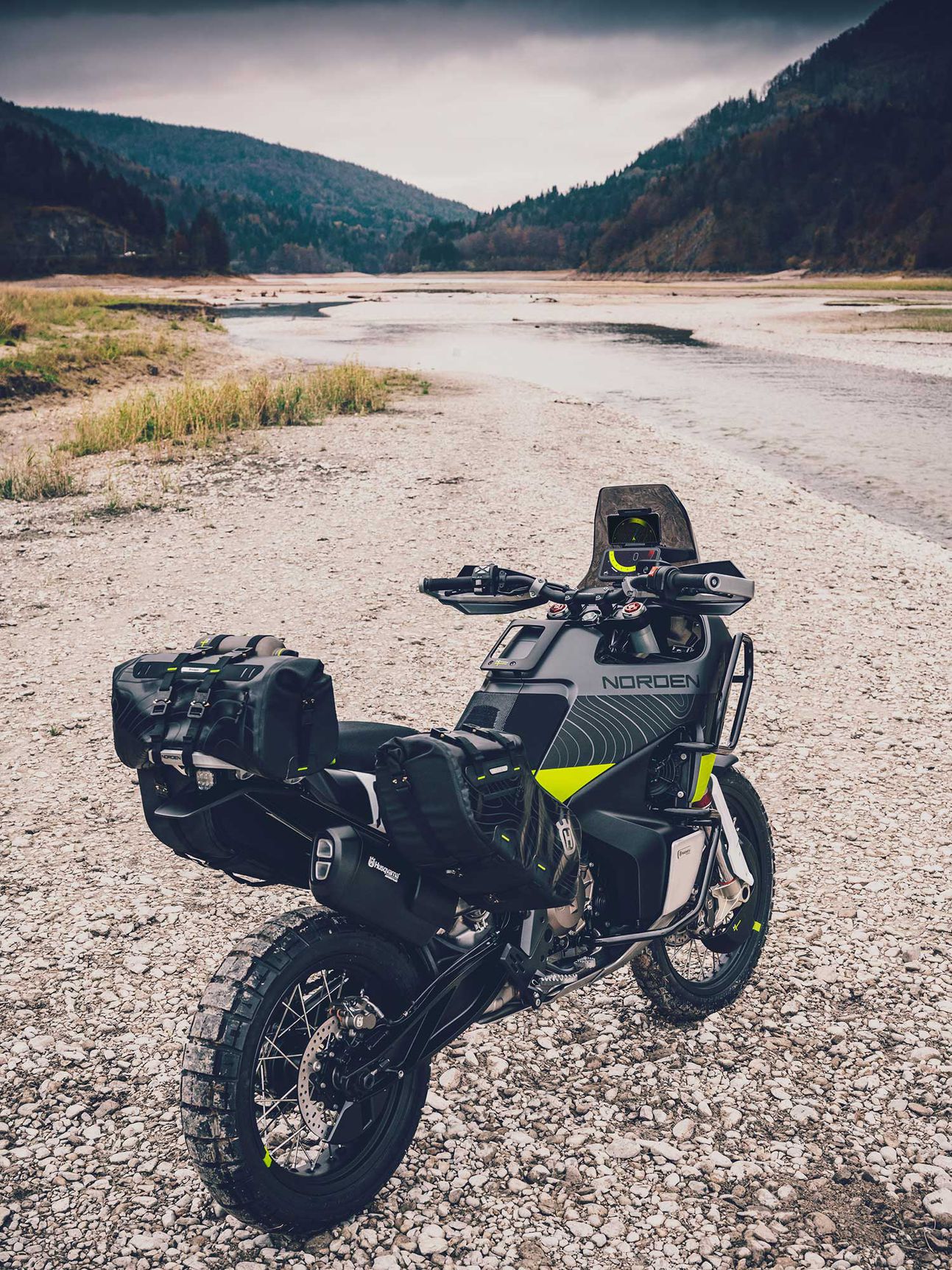 Expect to see plenty of accessories.Husqvarna

And for now, that’s all we have definitively from Husqvarna. No date is yet set for release, nor is a price point. Husky does refer to the bike as “high-performance,” “slim,” “lightweight,” and packed with “high-end modern equipment.” Though the extent to which this is merely PR-speak won’t be revealed until closer to release, when Husqvarna will divulge more of its secrets. 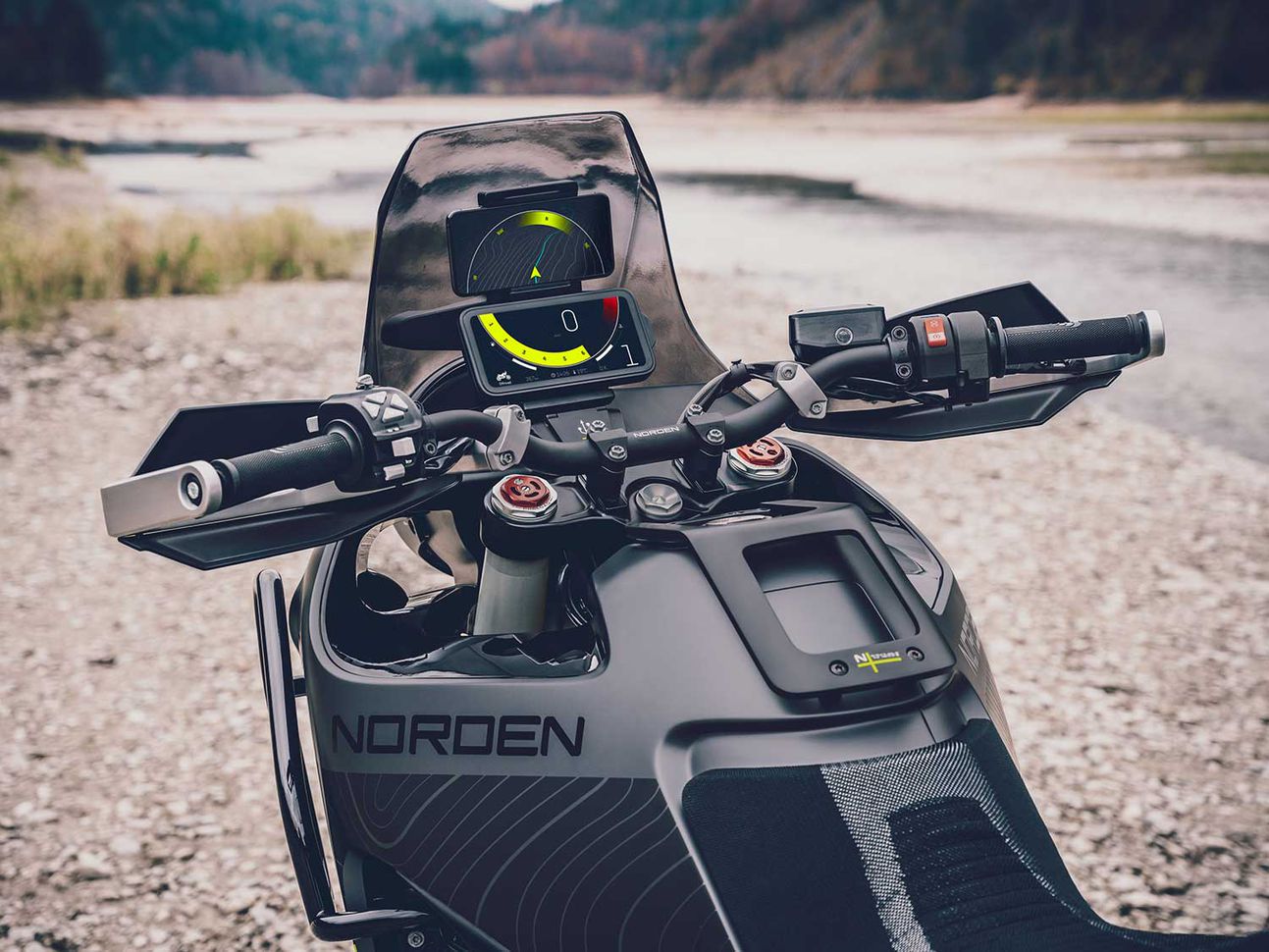 With the promise of “high-end modern equipment” we expect to see some pretty trick elements on the Norden.Husqvarna

The bike will be an interesting player in the packed adventure-touring segment. Its size puts it between the Africa Twin from Honda and bikes like the KTM 790 Adventure. Or in other words, an upper middleweight to light heavyweight. This is a great place to be in terms of producing a bike that provides plenty of power without bulk at a competitive price point. Granted, Husqvarna street machines trend a bit higher on the price scale than comparable models from Japan, but it will undoubtedly be less of a strain on your wallet than the top-tier bikes in this segment.
Stay tuned for more information on the Norden as it becomes available. 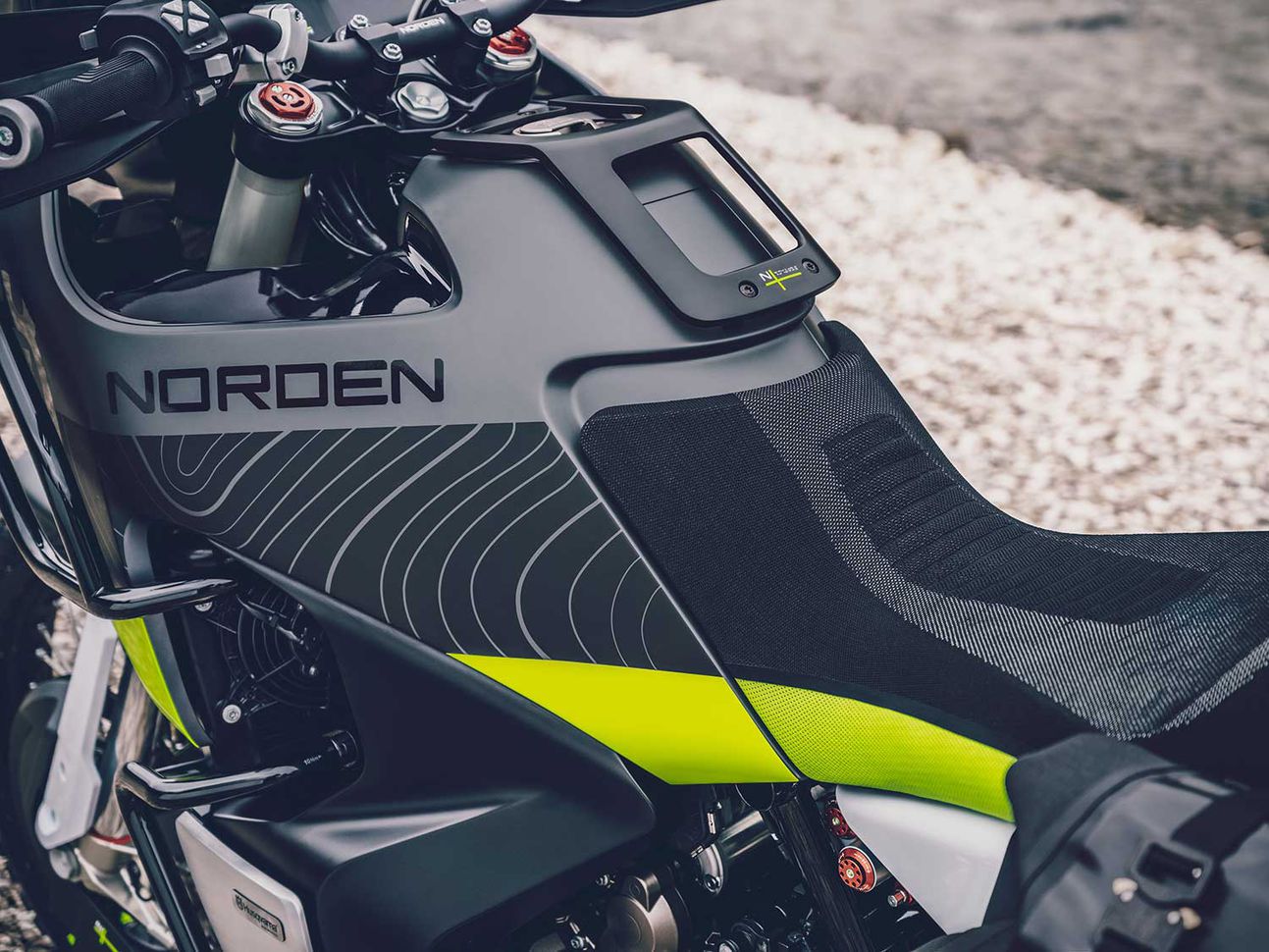 Made for long travels or daily commutes.Husqvarna 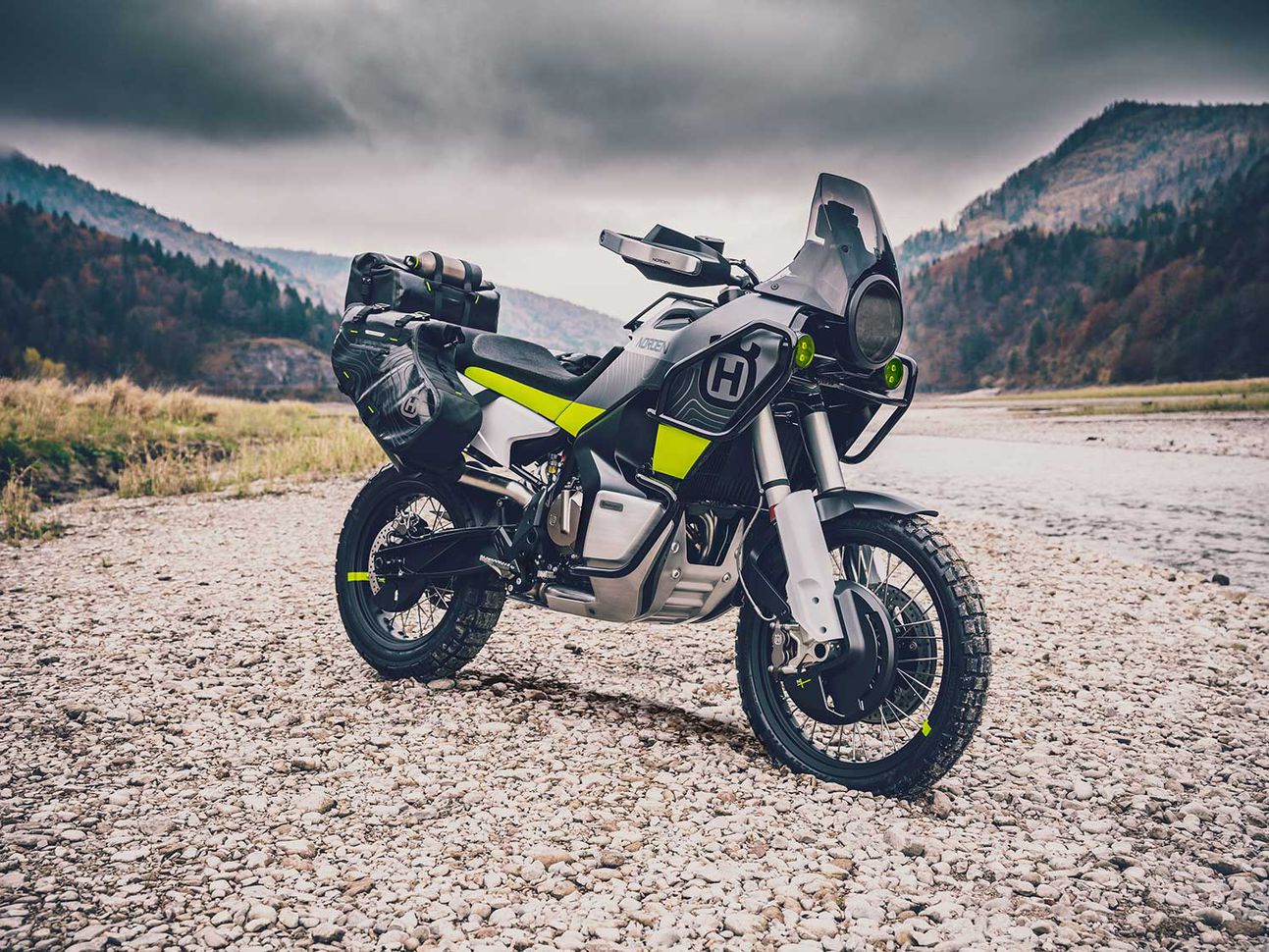 No details yet on when the Norden will actually be available.Husqvarna