Training/Schools The inside line about Yamaha Champions Riding School

I keep saying it and I haven't yet done it - but I want to - nay, need to - take an advanced class like a cornering school.

“There are few people who can sort everything out while they are actually on the motorcycle. Stop, get off the machine, and have a think about it. Go over and over in your mind what you are doing wrong.” —Kenny Roberts

Ever have that experience back in your school days, when your teacher just couldn’t explain some concept to you in a way that made any sense? So what did you do? If you were exceptionally studious, you probably went to another teacher to have it explained in a different way. Everyone’s brain works differently and the best instructors know that.

You don’t have to be especially studious to grasp new concepts at Yamaha Champions Riding School (YCRS). The instructors take the guesswork out of it because they appreciate that when it comes to learning something new on a motorcycle, different riders are going to struggle in different areas.

YCRS founder and lead instructor Nick Ienatsch is always saying riding a motorcycle is simple, but that it’s difficult to do at a high level. YCRS uses various techniques to get students to see, experience, and troubleshoot their way to better riding. The techniques revealed to me what I need to work on—trail-braking, getting on the racing line, putting my body in the right position, using my eyes to scan the track—and illustrate how to improve in every area.

Here are five methods that YCRS used that really helped me understand what I was doing wrong, and what I needed to do to improve. 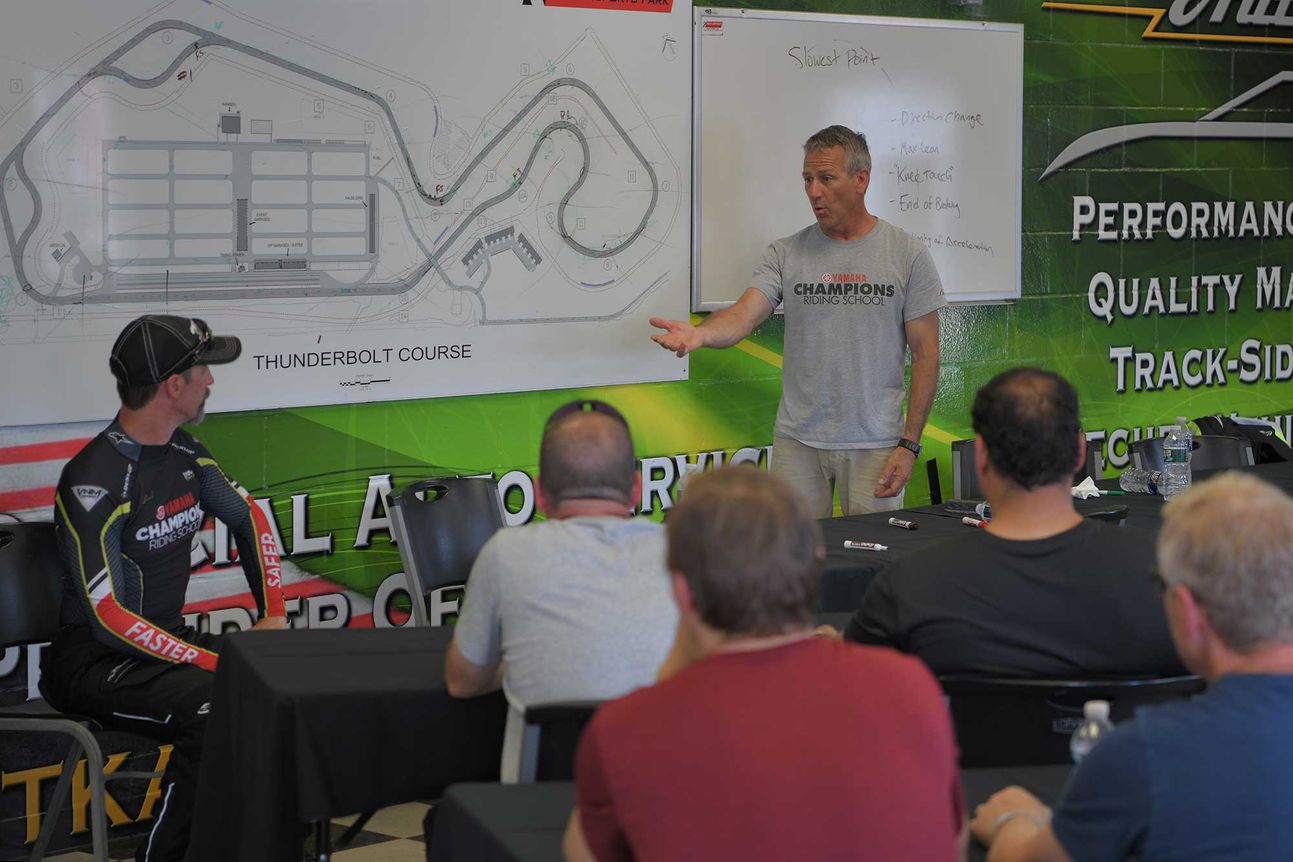 Ienatsch is clear from the start: “This is school.” Sure, it’s fun, but it’s still work and it can be a little stressful. The information is too critical to motorcycling success for it to be passively consumed. If I was as rapt during Econ 101 as I was in the YCRS classroom, maybe today I’d have some lucrative finance career, and have more than just a closet full of motorcycle helmets to show for all my hard work. But I love motorcycle helmets, so it’s all good.

See It To Believe It: Filmed Lap 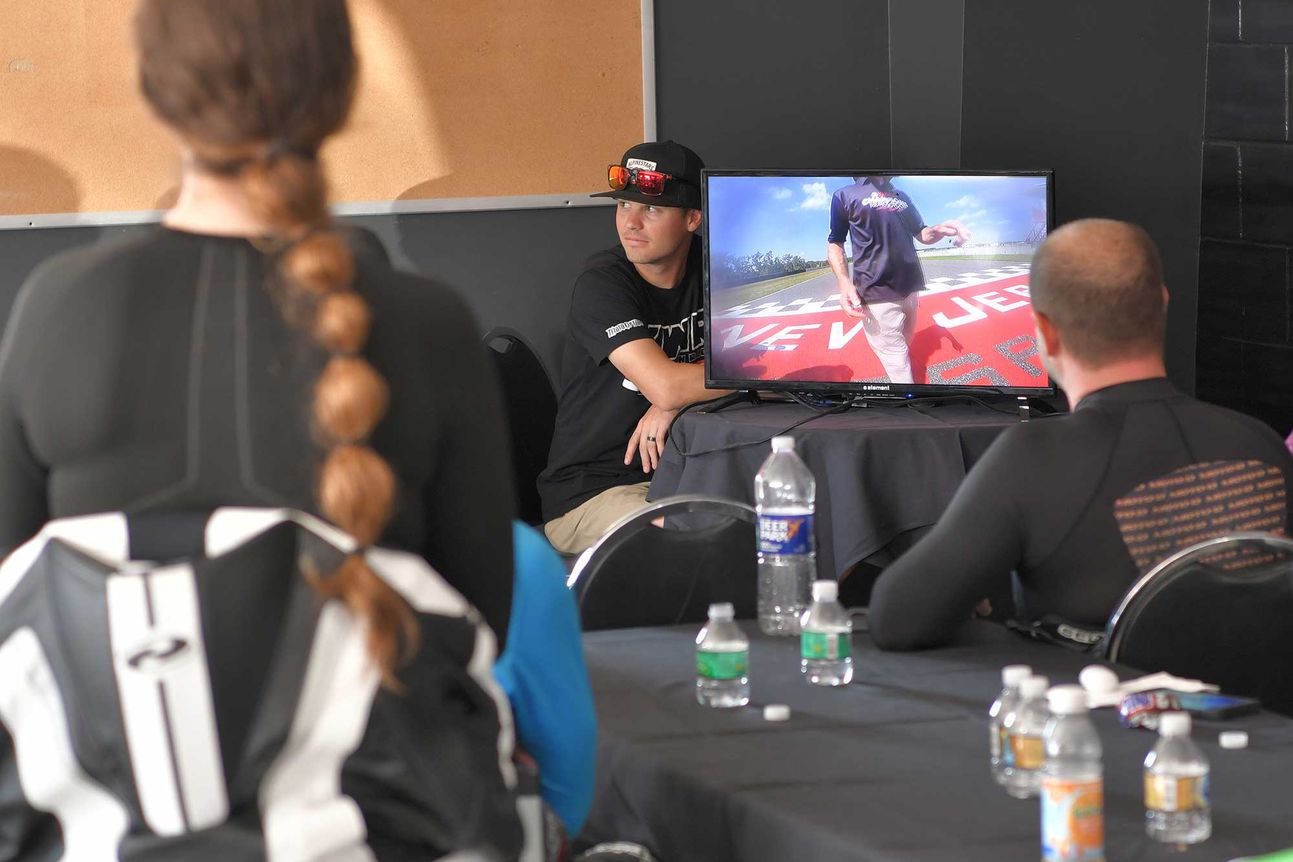 During each day of ChampSchool, instructors followed every rider to film a lap of them in action. In my head, I thought I was hanging off the bike like Marc Márquez, but when I watched my lap I was amazed at how much my body was over the center of the bike.

After watching myself on film, the instructors helped me set specific goals for day two. And day two’s filmed lap showed me how much I’d improved in just one day.

However, like hearing your own voice when you record your voicemail message, watching a lap of your riding can be somewhat uncomfortable. “So that’s how people really see me?”

Sometimes a dose of reality is exactly what we need to help us make the next step in our riding skills. 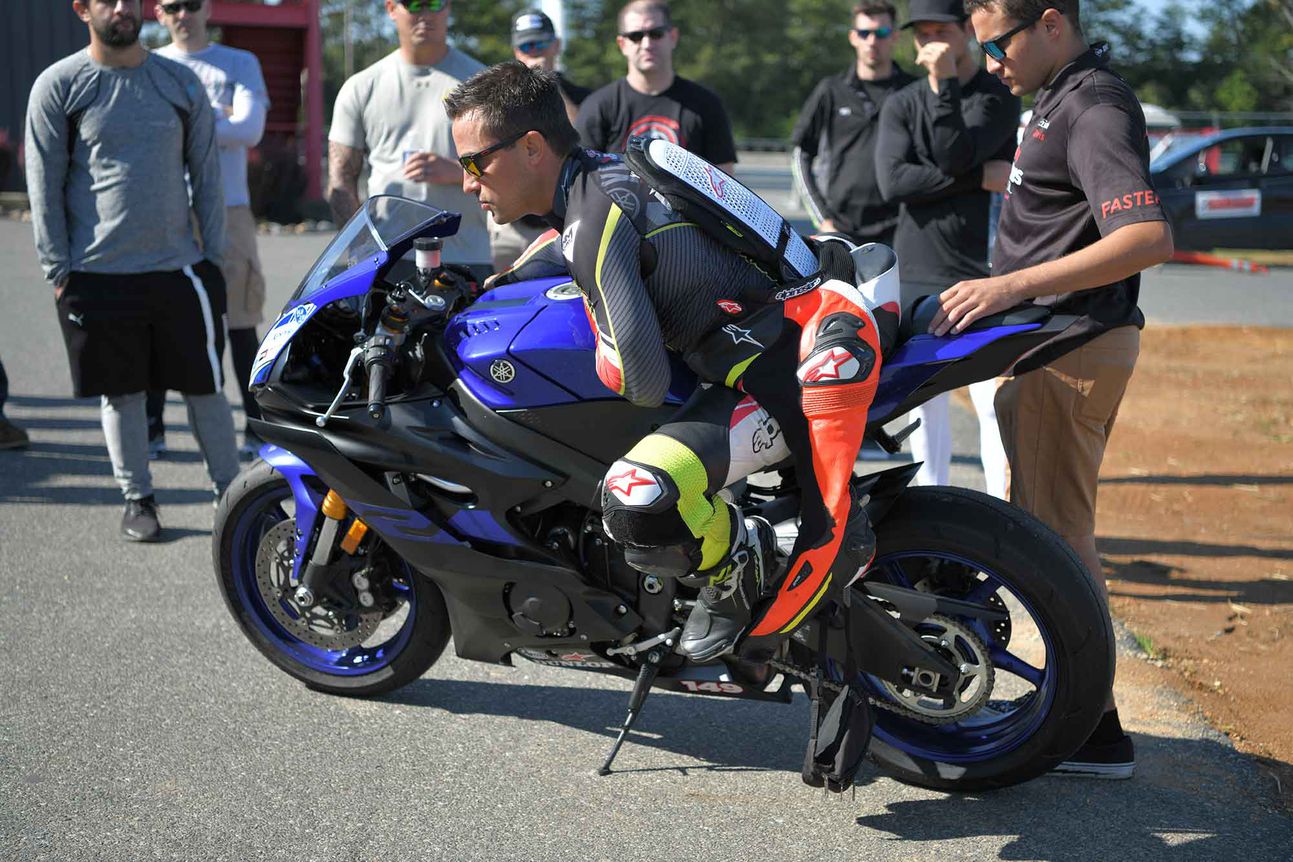 Riding a motorcycle at the pro level is like doing eye surgery in the middle of an earthquake.

When I did a two-up lap with racer and YCRS instructor and co-owner Chris Peris, I was astounded at the simultaneous elegance and brutality of really riding.
Peris made minuscule throttle and brake applications on the motorcycle that were amplified on the circuit as huge speed and eye-popping-G-levels of braking. It demonstrates the fundamental experiential dichotomy of motorcycling.

Imagine if the volume control on your home theater receiver increased the level at a rate 10 times as quickly as it does ordinarily. That’s basically how a motorcycle is designed. Tiny inputs have very big effects. In the face of the overwhelming mental and sensory input of a speeding cycle, a rider with highly tuned motor skills makes the minutest manipulations at just the precise moment to control massive variations in speed and direction.

Everyone who took a two-up lap with Peris got off feeling pretty envious of his ability to go fast. I’d like to say riding a motorcycle quickly is all the guy’s got going for him, but unfortunately, he’s articulate, funny, and looks like he’s been to the gym a few times. Super-nice guy, though, so it’s hard to hold it against him. Especially when your life’s in his hands.

In all seriousness, the experience showed me what a motorcycle is really capable of. I’ll never be anywhere as close to as proficient as Peris, but I’ve got a reference point now of what really riding a motorcycle feels like. 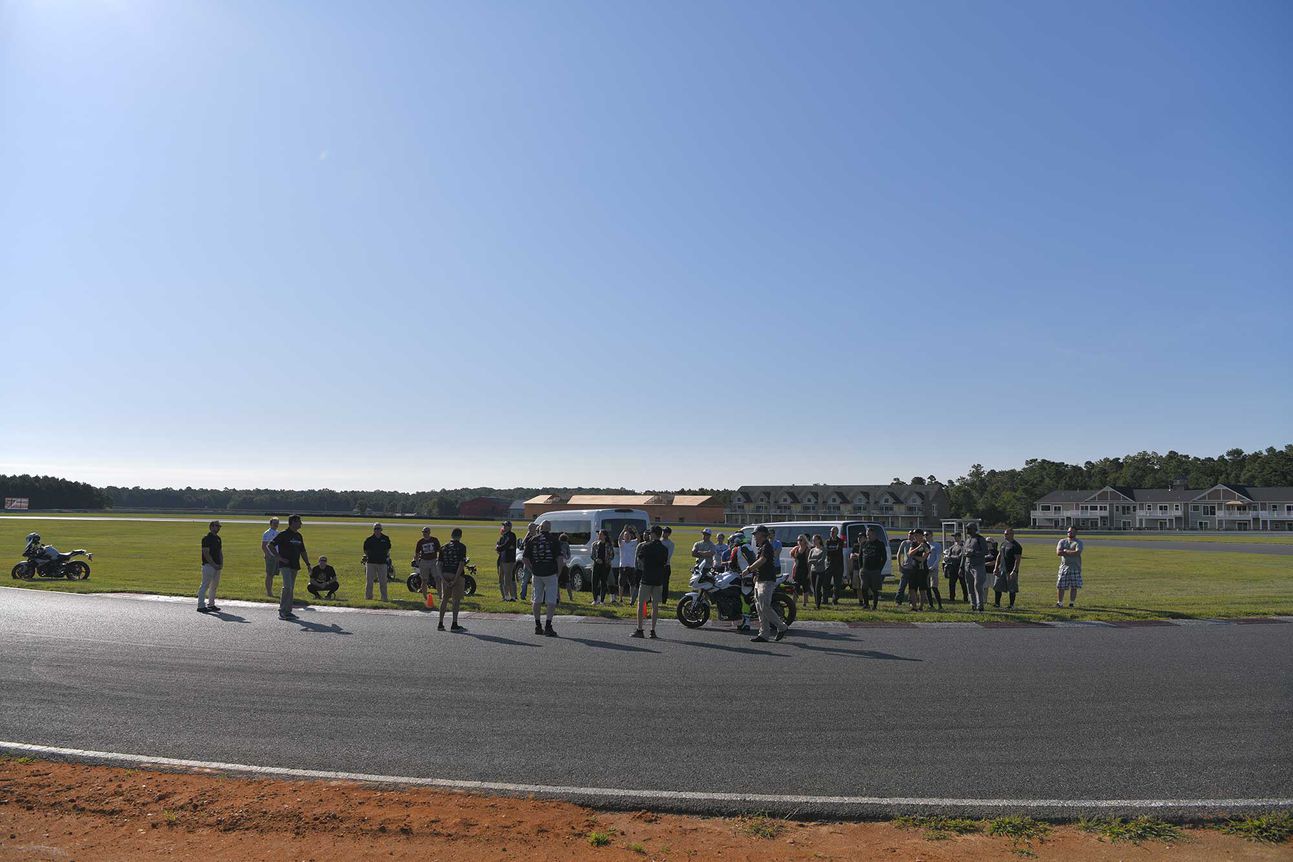 Ientasch takes us around the track in a 15-passenger van, and I’m pretty sure he’s lapping faster than I do on a new YZF-R6. It’s illuminating. And a little shaming.
By staying on the racing line and using the brakes to nail the radius of the corner and minimize body roll, Ienatsch demonstrates the importance of the principles he’s teaching for two wheels. We may be in a huge van, and the physics of riding a motorcycle are different than a car, but they’re not entirely different.

One of the biggest things I struggled with on track was braking too much, too soon—by the time I was at the apex, I’d scrubbed off more speed than I needed to. Before YCRS, I did most of my braking straight up and down, rather than trail-braking through the corner.

Now, I’m trying to rewire my brain. Even driving my station wagon with my 1-year-old in the car seat, I’m trying to trail-brake through corners at the same speed I’d previously gone through them with the brakes off. My wife finds this annoying, but I promise her it will eventually pay off with a smoother ride. For the sake of marital harmony, here’s hoping for a steep learning curve.

Ride Around The Problem: Champions Lap 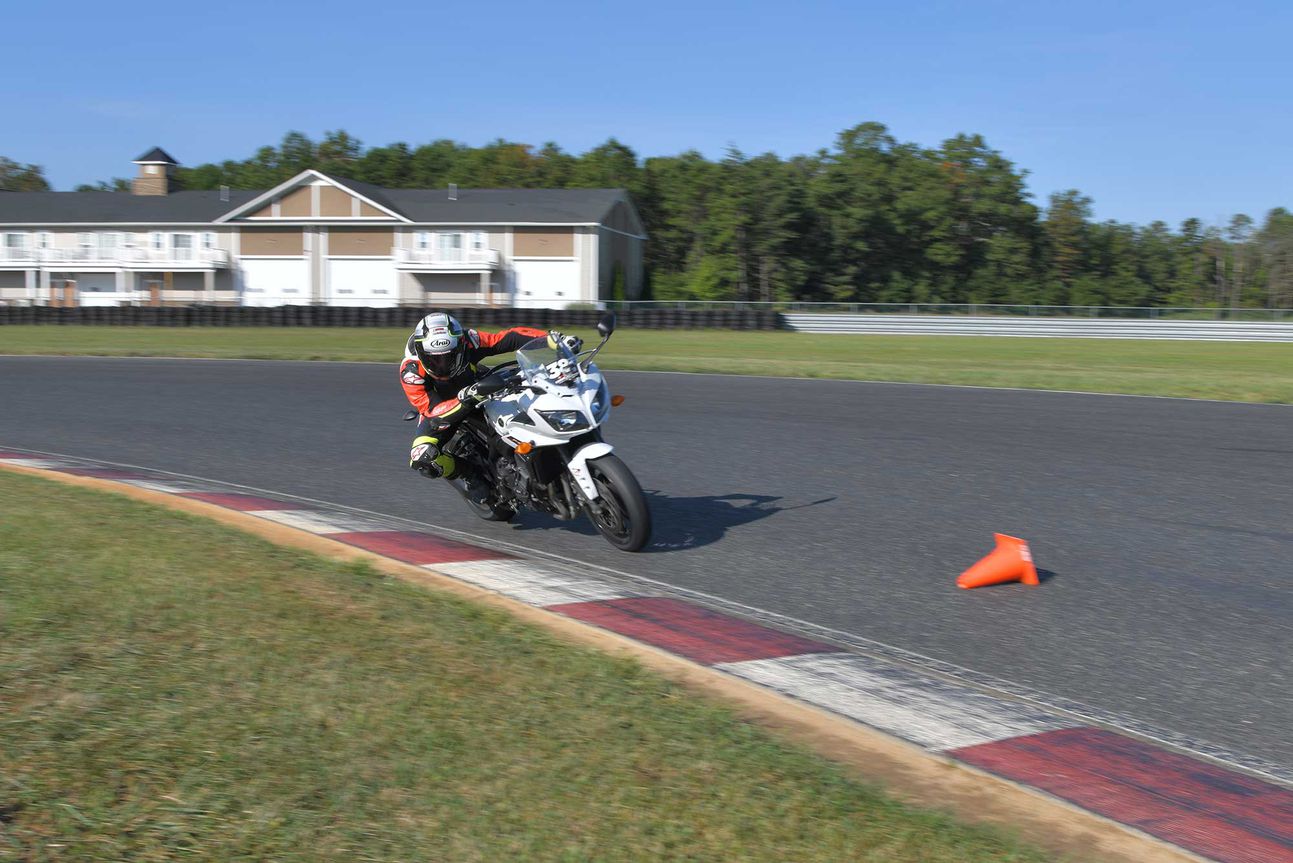 The Champions lap is the final exercise. For each lap, instructors give a new challenge. “Imagine your hips are broken and you can only bend at the waist.” “Pretend your left bar is missing so you have to ride with your hand on the triple clamp.” “Your zipper is stuck in your gas cap. You’ve got to ride the whole lap in a racing tuck.” “Oh, and look out for cones. We’ll constantly move them around the track to change the lines you have to take.” 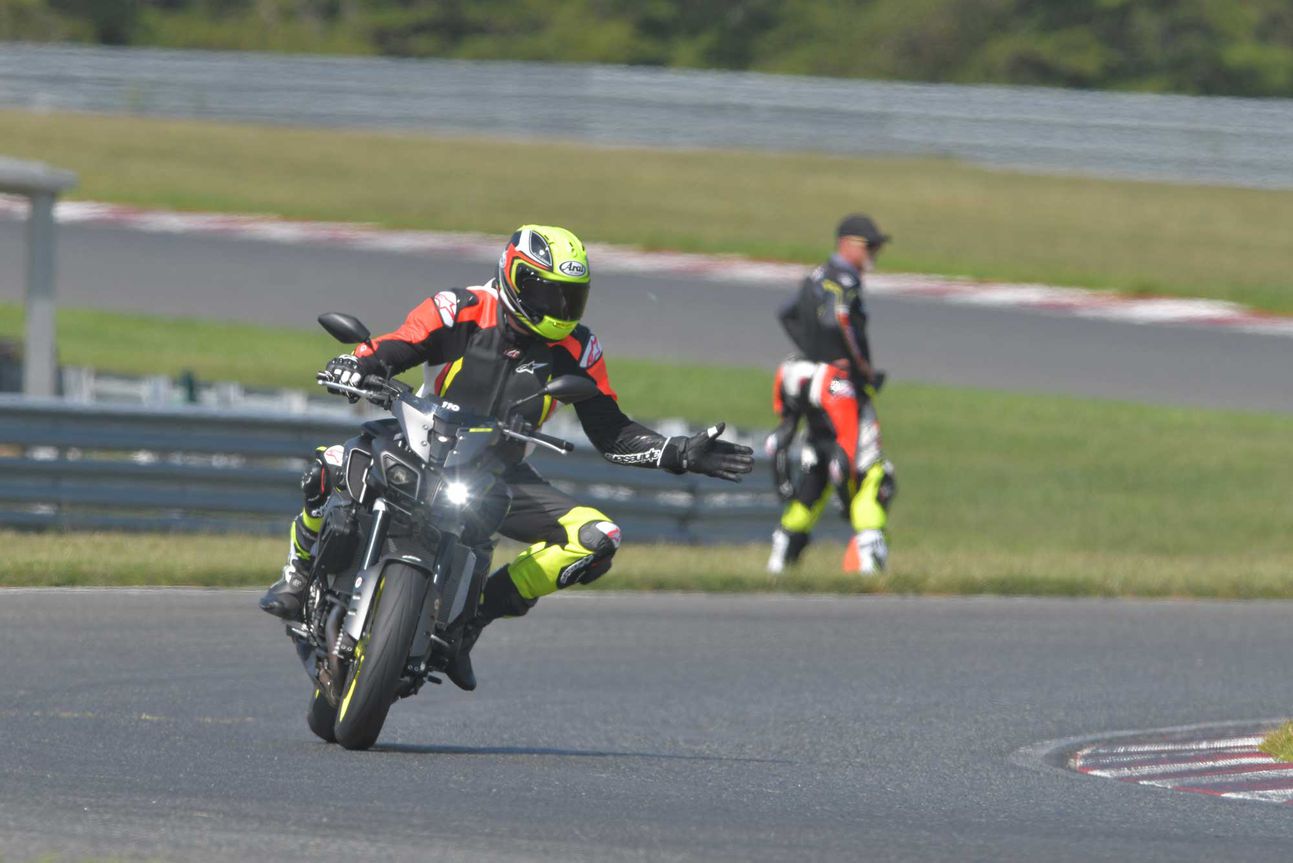 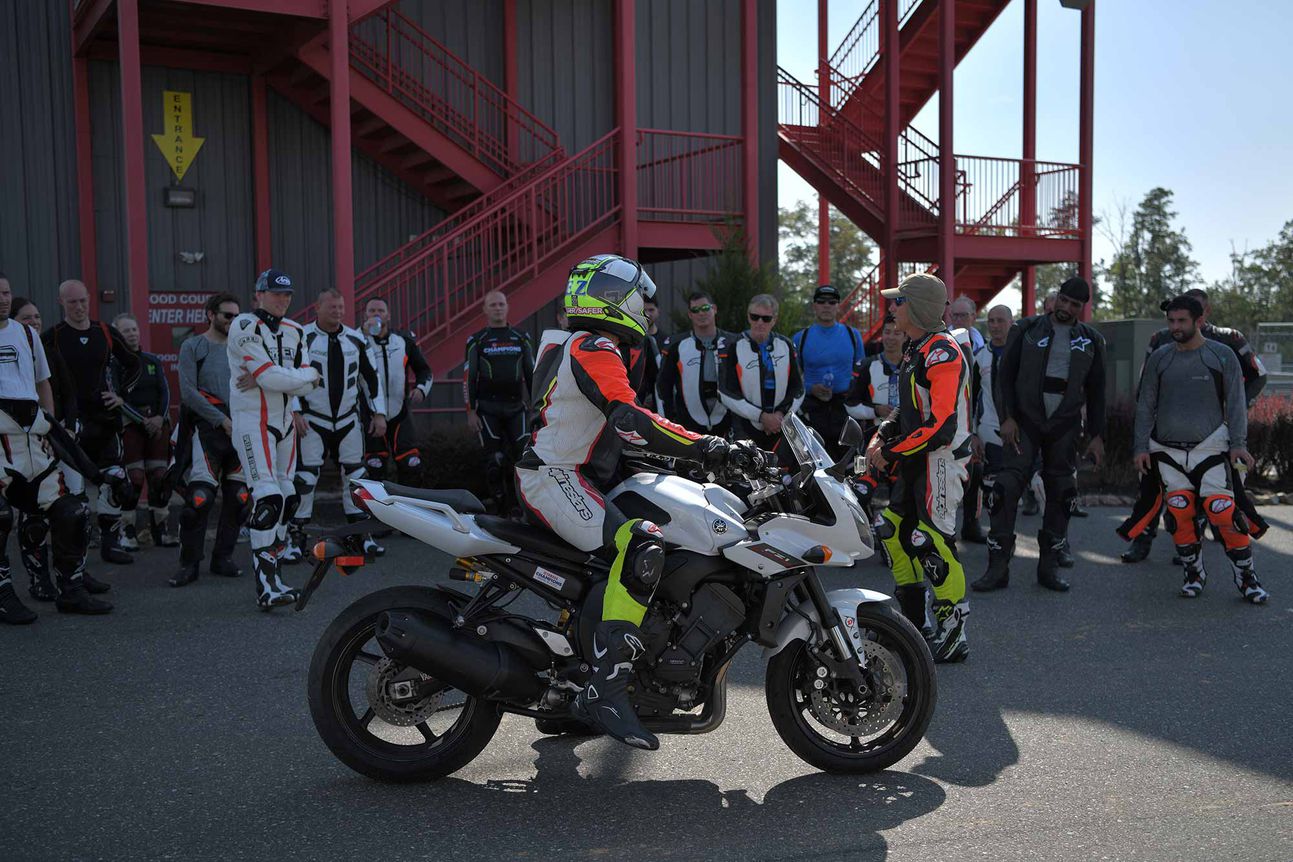 The best racers are able to ride around problems. “So practice the problems,” the YCRS instructors say. For average riders like me, the handicaps help reveal the extent to which riding the right way is, well, the right way. When I could only bend at my waist, I compensated by getting my head really low. The bike responded to my movement and I hit an apex or two sooner than I expected. “Hmm, my head should always be this low,” I thought to myself.